The Story Behind Prague’s Memorial To The Victims of Communism

Located near the Lesser Town neighborhood, the Memorial to the Victims of Communism is a striking, somber, and unforgettable tribute to the people who lived through a tumultuous time in Czech and Slovak history.

The memorial consists of a set of sculptures lining a staircase that leads to one of Prague’s most tranquil tourist areas. Some visitors pass right by, unaware of the site’s importance. For travelers with a sense of history, however, the memorial deserves attention — and a certain amount of reverence.

Where Is The Memorial To The Victims Of Communism?

The memorial is located on Petrin Hill, one of the largest urban green spaces in Prague. The beautiful gardens at the top of the hill create a stunning juxtaposition with the memorial, and travelers can spend an entire afternoon enjoying the nearby attractions.

The hill features a television tower that mimics the Eiffel Tower of Paris, so it’s difficult to miss. At the top, visitors can access three gardens: Nebozizek Garden, Seminary Garden, and the Rose Garden, all three of which receive regular traffic from international tourists. If you’re planning on visiting this part of the city, you can avoid the crowds by heading out early in the morning or later in the afternoon. During peak seasons, however, some traffic is unavoidable.

In addition to the memorial, visitors can see more lighthearted attractions: There’s a mirror maze, a lookout tower, and several playgrounds for younger visitors. The gardens don’t have admission fees, but other attractions have moderate fees of roughly $3.

The History Of Communism In Prague

Czechoslovakia formed a Communist government in 1948 in what international observers widely called a “bloodless coup” (an inaccurate description, given the eventual death toll of the Czechoslovakian government).

While the country was not an official Soviet state, Soviet influence certainly played a role in Czechoslovakia’s harsh implementation of Communism. Many Czech people suffered under the system until it was officially abolished in 1989 in the Velvet Revolution. In 1993, Czechoslovakia split into two states: the Czech Republic (of which Prague is now a part) and the Slovak Republic (commonly called Slovakia in the West).

Under Communism, Czechs faced serious repercussions for resisting their autocratic leaders. Olbram Zoubek, the sculptor behind the Memorial to the Victims of Communism, was punished in 1969 for memorializing Jan Palach, a university student who self-immolated as an act of resistance against Communism in Prague.

“I expected it, but it wasn’t the kiss of death,” Zoubek told Czech Radio years later about government censorship. “I only couldn’t travel, I couldn’t sell my work, and I couldn’t accept commissions. But I was able to work as a restorer, and that wasn’t too bad. It was possible to survive.”

The Story Behind The Memorial

On May 22, 2002, Prague unveiled the Memorial to the Victims of Communism to commemorate the 12th anniversary of the fall of Communism in the Eastern Bloc. Zoubek developed the sculpture with architects Jan Kerel and Zdenek Holzel.

Compared with other memorials, the Memorial to the Victims of Communism is fairly graphic. Seven bronze figures, all fully nude men, ascend a broad staircase. The man at the base of the stairs is mostly intact, but each successive figure is less complete; at the top of the staircase, a pair of abstract feet complete the sculpture. Walking along beside the figures, observers get the sense that the man is gradually disintegrating.

A plaque near the memorial reads: “The Memorial to the Victims of Communism is dedicated to all victims, not only those who were jailed or executed, but also those whose lives were ruined by totalitarian despotism.”

To provide additional context, metal strips along the staircase number the victims of Communism in Czechoslovakia:

Those numbers are especially shocking when one considers the relatively small population of the former Soviet state. In 2018, the Czech Republic had an estimated population of just 10.6 million.

How To Visit The Memorial To The Victims Of Communism

To get to this part of the city, take tram 9, 12, 20, or 22 and exit at Ujezd. Be sure to check the tram’s schedules for operating hours. The memorial is at the base of the hill, directly opposite Vitezna Street. You can take photographs without causing offense, but take care to act respectfully when near the sculptures.

While the Memorial to the Victims of Communism isn’t exactly a lighthearted addition to a vacation itinerary, it’s an important reminder of Prague’s complicated history. Few memorials are as visceral and affecting, and travelers who want to truly experience Czech culture should certainly spend a few moments here. 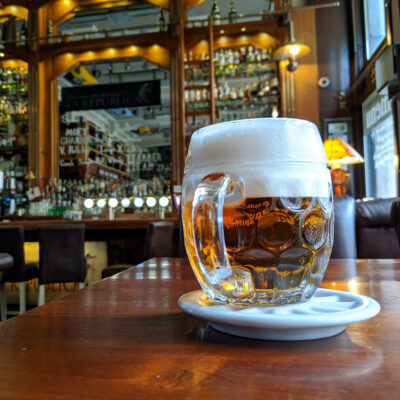 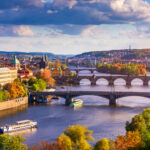 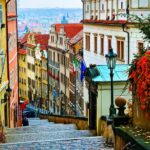 PraguePrague’s Hidden Gems: 7 Places To Visit Off The Beaten Path