On Italy’s Coast Of The Gods, A 6th-Century Monastery Sits Perched Upon A Rocky Cliff

As you climb the winding stairs that lead to Santa Maria dell’Isola — a stunning church set upon a rocky cliff — you’ll be surrounded by the incomparable beauty of Italy. On one side, you’ll see the historic city of Tropea carved into a cliff, and on the other, you’ll see the gorgeous and inviting blue waters of the Tyrrhenian Sea.

The church itself is small but mighty — it has withstood the test of time for centuries.

Here’s everything you need to know about Santa Maria dell’Isola, including its rich history, how to visit, and what to expect once you’re there.

Where Is Santa Maria Dell’Isola?

Santa Maria dell’Isola is on the coast of the Tyrrhenian Sea, also known as the Coast of the Gods. The monastic church is situated near the town of Tropea in the region of Calabria, the southernmost region of mainland Italy.

Santa Maria dell’Isola is located 125 miles northeast of Catania, a port city on Sicily’s east coast, and about 250 miles south of Naples.

The structure is only accessible by a flight of steps carved into the jagged cliff.

The History Of The Church

The church dates to as early as the 6th century and was originally occupied by Basilian monks. By the 11th century, the church belonged to the Benedictines, the religious order that owns the church today.

Santa Maria dell’Isola does look new and improved, but that’s a product of the church’s long history of renovations. During the medieval times, the church was perceived as modest, but it was given a more elaborate facelift during the Renaissance.

In 1905, the facade of the church was obliterated by a hurricane, and massive renovations took place to repair the damage caused by the natural disaster. Further renovations that focused on preserving the historic structure took place in 2010.

When you visit, prepare for a steep trek up to the church — the breathtaking views at the top are worth the hike! The church itself is small, and you’ll be able to explore the area in its entirety within an hour. The cliff affords stellar views of the lovely town of Tropea, the beach nearby, and the shimmery sea around it.

Tickets cost less than $3 per person. If you’re interested in a more intimate experience, you can inquire about a group tour. The hours of operation change with the seasons, so be sure to check the website before you go.

Since seeing the church itself won’t take long, consider taking a boat tour down the coast afterward. The coast is most beautiful around the beach near Tropea.

Italy has an extensive train system, so it will probably be easiest to reach the area by train. Once you arrive at the Tropea train station, the church is less than a mile away.

A visit to Santa Maria dell’Isola is a dreamy cliffside adventure perfect for history buffs and suckers for a great view.

If you can’t get enough of coastal areas in Italy, we know eight gorgeous hidden beaches that will take your breath away. 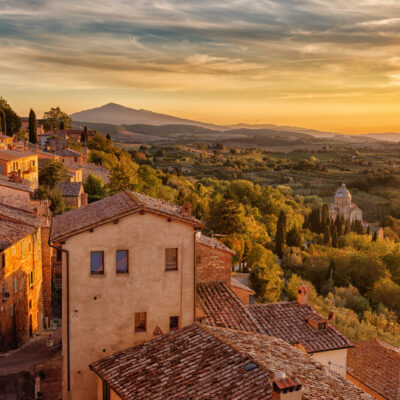