Made Out Of Pure Marble, These Incredible Caves Change Color Throughout The Year

The Marble Caves in southern Chile are a striking sight. Over the span of six centuries, the force of General Carrera Lake carved away at the belly of the caves, transforming their walls into a fusion of every shade of blue.

The colors of the caves vary with the seasons — sometimes, the caves lighten and transform into softer colors; other times, the cave has navy blue streaks. Whatever colors they’re exhibiting, the caves are something to marvel at any time of year.

Read on to learn about the fascinating sequence of events that caused this unique blue spectacle as well as how you can see it for yourself!

Where Are The Caves?

The Marble Caves are tucked away in southern Chile. The caves are in the Patagonian Andes on General Carrera Lake. Though the lake is shared by Chile and Argentina, the marble caves are technically in Chile.

The caves are just west of Monte San Valentin, the highest mountain in Chilean Patagonia.

The Science Behind The Blue Walls

The striped underside of the caves didn’t happen overnight.

In fact, the caves have been a work in progress for six centuries and are still changing! Over time, harsh waves washed up against the marble repeatedly, slowly carving the walls into the waves’ likeness.

Likewise, the walls reflect the color of the lake. The color of the caves depends entirely on the time of year, water levels, and freezing and melting of glaciers close by. In winter and early spring, the water is lighter — sometimes an icy blue, sometimes turquoise. In the summer, as glaciers melt and water levels rise, the caves deepen in color to shades of cobalt and royal blue.

How To See The Marble Caves

If you want to visit for yourself, you’ll have to plan ahead and prepare for a full day of travel.

You’ll need to drive or fly to Balmaceda, Chile, most likely from Santiago. Once you arrive in Balmaceda, you have to drive four hours southwest to General Carrera Lake, which is just south of Puerto Rio Tranquilo, a small village where you can rest and relax overnight in a hotel if you’d like.

You’re nearly there once you make it to General Carrera Lake! Board a boat or ferry, or — if you’re feeling extra adventurous — you can kayak to the magnificent blue caves. If you want to immerse yourself in the culture of the area, there’s a two-day tour that will take you to the caves and introduce you to life in Chile!

The journey might be long and a little complicated, but isn’t that part of what makes an adventure fun?

The Best Time To Go

The Marble Caves are spectacularly blue all year, but for the best possible viewing, go between summer and early fall when the caves are the most shimmery.

Before you head south to visit the caves, pencil in a few days to explore the capital of Chile! We have eight reasons to add Santiago to your travel bucket list! 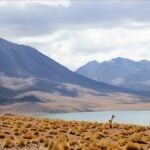