The Best Things To See And Do In Victoria, British Columbia

Located on British Columbia’s beautiful Vancouver Island, home to the mildest climate in Canada, is Victoria, the oldest city in the Pacific Northwest.

Here are some ways to make the most of your time in this lovely city.

Victoria’s Inner Harbour is the heart of the city; it has a long and rich history and was originally used by the First Nations. Today, you can explore the harbor on a 45-minute ferry tour. You’ll see local marine life, historic buildings along the shore, and seaplanes taking off and landing. Whale-watching tours are available from April through October, and Zodiac tours, on which you can view a variety of creatures, are available year-round.

If you’d rather enjoy the harbor from the shore, you can take in the spectacular views from the Inner Harbour Causeway, a waterfront pathway that winds through the beautifully landscaped grounds of the Parliament Buildings and the landmark Fairmont Empress Hotel. Buskers and artists frequent the Causeway in the summer.

Just around the corner from the Inner Harbour, Fisherman’s Wharf is home to food kiosks, unique shops, and eco-tour adventures. Working fishing vessels and pleasure boats are moored at the docks. Stroll past the colorful float homes at the eastern end of the wharf and appreciate the way the owners have decorated their small outside spaces, but remember to be considerate — these are people’s homes. You may spot wild seals at the other end of the wharf.

After you’ve finished exploring, grab lunch or ice cream at one of the kiosks and eat at an outdoor table while soaking up the atmosphere.

Stroll Through The Historic Downtown

Bordering the Inner Harbour, the streets, squares, and alleyways of Victoria’s downtown are full of historic landmarks, well-preserved 19th-century buildings, and modern shops, pubs, and restaurants. Walking through this area is a pleasant way to spend an afternoon.

The historic buildings of Bastion Square house pubs and cafés (and patios and an artisan market in the summer). Helmcken Alley off of Bastion Square was once a jailhouse and prisoners’ graveyard. The open courtyard of Market Square hosts a variety of events. Trounce Alley is home to authentic 125-year-old gaslights, one-of-a-kind shops, and a variety of restaurants. Waddington Alley, known as the last wooden street in Victoria, is a shortcut between Yates and Johnson Streets that is paved with creosoted wooden bricks made of old-growth Douglas fir.

Enjoy The Gardens And Parks

Victoria is known as the City of Gardens. Not only are the public spaces beautifully landscaped, but there are several formal gardens as well.

The 55 acres of Butchart Gardens, located on the site of a former limestone quarry 30 minutes from downtown, offer blooming delights for every season. Fireworks light up the sky on Saturday evenings during the summer. Abkhazi Garden was lovingly developed over 40 years by Prince Nicholas Abkhazi and his wife, who designed it to work with the rocky slope of the land. At Government House, the official residence of the Lieutenant Governor, a variety of specialized gardens flow into one another. There is also a rare Garry oak ecosystem.

Craigdarroch Castle is a Victorian mansion on a hill overlooking the city. Built between 1887 and 1890 for coal baron Robert Dunsmuir to resemble a castle from Dunsmuir’s native Scotland, the luxurious mansion features a circular tower, a tower balcony, stained glass windows, and intricate exotic wood. Furnishings in the restored National Historic Site date to the 1890s and early 1900s, and placards explain how each room was used.

A visit to Craigdarroch Castle provides a glimpse into the 1890s, intriguing stories about the Dunsmuir family, and insight into the history of the city of Victoria.

Visit The Royal BC Museum

The Royal BC Museum showcases British Columbia’s natural and human history. Natural history displays recreate coastal forests, sandy shores, river deltas, and rocky outcrops. The Totem Hall features a collection of crest poles and house posts from several First Nations communities. Other First Nations exhibits include masks, art, carvings, an interactive language display, and a ceremonial house. In the modern history galleries, you’ll find a recreation of an urban center from the late 1800s, a full-scale replica of the HMS Discovery, and mining and sawmill exhibits.

Thunderbird Park, located next door, contains a collection of replica totem poles. You’ll also find Helmcken House, one of the oldest houses in British Columbia still at its original location, and Saint Ann’s Schoolhouse, which may be the oldest building still standing in Victoria.

Victoria is home to Canada’s oldest Chinatown. From the 1850s through the 1880s, Victoria was the port of entry for many Chinese coming to work in mines, logging camps, salmon canneries, and railway construction.

In today’s vibrant Chinatown, you’ll find historic buildings and a lively urban scene. Fruit and vegetable stands, curio shops, and restaurants line the sidewalks, and Chinese characters and lanterns decorate Fisgard Street. Fan Tan Alley, the narrowest street in Canada, was once the site of gambling and opium dens. Today it houses more than a dozen shops.

You can experience Chinatown’s history, architecture, and symbolism on a guided 90-minute walking tour. Alternatively, you can use this map to explore on your own.

Relax By The Beach

Surrounded by the ocean, Victoria has a number of beach areas. Willows Beach, a 15-minute drive east from downtown, is a popular swimming beach with shallow water and sandy shores. A paved esplanade and steep stairs at the north end of Willows Beach will take you to the rocky shores of Cattle Point in the Uplands Park area. You can look for driftwood at the sandy beach in Cadboro-Gyro Park.

Given Victoria’s location on the water, it should be no surprise that seafood gets top billing at the city’s restaurants. The nearby land provides other fresh ingredients. Victoria is known as the craft beer capital of British Columbia, and there are numerous brewpubs and gastropubs; it’s also the most British city in Canada, so the traditional afternoon tea, often served with a West Coast twist, is popular.

Some of the many restaurants that serve seafood include Fish Hook, with two locations offering Indo-French-influenced sustainable local seafood in a casual setting; Finn’s, located in a heritage building overlooking the harbor; the long-standing family-owned Nautical Nellies; and Ferris’ Oyster Bar. Red Fish Blue Fish, a waterfront eatery in an upcycled cargo container on an Inner Harbour pier, offers a unique and sustainable approach to the old fish-and-chips shop. Expect a long wait.

Ethically raised livestock and organically grown produce at 10 Acres Farm form the foundation of the menus at three downtown restaurants: the Bistro, where the menus evolve with the seasons; the Commons, featuring long table seating and a patio overlooking the water; the Pier which serves seafood seaside in the Pier Hotel, and The Cafe, serving housemade cafe favorites in Sidney’s iconic waterfront.

Other restaurants featuring locally sourced ingredients include the organic Agrius; OLO in Chinatown, which applies a melting pot of techniques to seasonal ingredients; and Nourish, with its diverse menu featuring vegan, gluten-free, and dairy-free options.

For a true farm-to-table experience, drive 30 minutes from downtown to Roost in North Saanich, British Columbia, where café and bakery menu items feature products from the family farm and winery.

Victoria is home to Canada’s oldest brewpub, Spinnakers, which paved the way for modern brewpubs in Canada. There are 12 taps of Spinnakers beer, and other local craft beer is also available. Spinnakers partners with local farmers and producers to serve delicious meals with their pints.

Other brewpubs offering meals include the waterfront Canoe Brew Pub, with its seasonally inspired menu; the small-batch Swans Brewery located in a 1913 building at the edge of Chinatown; and The Moon Under Water, inspired by the European brewing tradition.

The Fairmont Empress offers the iconic Victoria afternoon tea experience and has been doing so for more than 100 years. The afternoon tea at the Hotel Grand Pacific takes inspiration from the Wild West Coast. You can enjoy your afternoon tea in a historic mansion with views of the harbor at Pendray Inn & Tea House. Butchart Gardens and the Abkhazi Garden provide scenic settings for afternoon tea as well.

Downtown Victoria offers great shopping with a variety of name-brand stores and one-of-a-kind boutiques on the main streets, side streets, and alleyways. Look for handmade gifts, indigenous art, native crafts, jewelry, and trendsetting fashions. A section of Fort Street is known as Antique Row.

The indoor year-round Victoria Public Market, located in the historic Hudson building in downtown Victoria, offers a range of farm-fresh and locally sourced foods, handcrafted goods, and gourmet items. Open Thursday through Sunday from May through September, the Bastion Square Public Market offers a selection of handmade products, often with the artisan working on-site. The Sunday market features entertainment as well.

Shopping malls include the Bay Centre, with its streetfront and interior stores; the fashion-focused Mayfair Shopping Centre; and the sophisticated open-air Uptown.

Planning a trip to British Columbia? Check out these nine things to see and do (and these 11 hidden gems) in Vancouver. 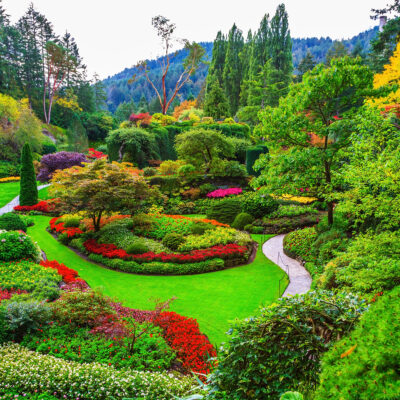 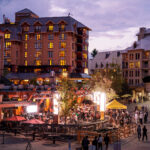 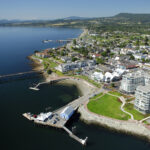 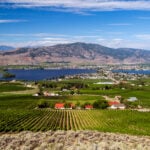