How To Spend A Day in Brussels, Belgium

“If it’s Tuesday, this must be Belgium.” This long-standing joke is the sad truth of many of a pan-European tour — the pace is so rapid that you’re never entirely sure where you are. So when you finally do make it to Belgium, you’ll be lucky if you get a day. That’s a shame, because Belgium is a fantastic travel destination, and its capital city, Brussels, is well worth at least a day, if not more.

Here’s what every traveler should experience while there, even if only for a day.

Almost every visit to Brussels starts in the Grand Place. It’s absolutely stunning and enjoyable at all times of day and night. Dating to the 10th century, it’s one of the most beautiful squares in Europe thanks to the rich merchants who built magnificent guild houses as headquarters for the different trades. Today, Grand Place is home to plenty of cafés and shops, the occasional special exhibit, numerous events in the square’s center (like the Flower Carpet, which happens every two years in August), and great people-watching.

One of the star attractions of Grand Place, the Gothic Hotel de Ville, the town hall, was built in 1402. Today it is the seat of Brussels’s government. There are guided tours available that explain the architectural significance of the building’s arched windows, towers, and ornamental sculptures. If you’re in need of a leg workout, the 315-foot-tall Brabantine Gothic tower is happy to oblige and will reward you with amazing views of the city.

Located just opposite the Hotel de Ville, also in the Grand Place, is the Brussels City Museum. It’s one of many Grand-Place attractions that are known by several names! In this case, the museum is known as the Maison du Roi in French and Broodhuis in Dutch. It showcases the history of Brussels, and the exhibitions cover everything from the Middle Ages to the present day. The paintings, maps, tapestries, ceramics, silver, and porcelain objects that tell the story of Brussels’s development as a city are very interesting. But the true stars of the show are the nearly 1,000 costumes belonging to Manneken Pis. Yes, Brussels’s most famous impish statue has a wardrobe, and an extensive one at that! And there really is a city employee whose job it is to manage Manneken’s wardrobe.

Yes, Brussels’s most endearing symbol is a fountain made from a statue of a toddler peeing. The name Manneken Pis translates to “little man peeing,” and the statue is emblematic of the bizarre sense of humor Belgians are known for. Surprisingly, Manneken is not the only bathroom-related sculpture in Brussels. The lesser-known Jeanneke Pis is Manneken’s female counterpart. And virtually no visitors know about the best statue of all — Zinneke Pis, a cute dog relieving himself on a post! For a great urban walk, head to all three statues and fortify yourself along the way with waffles, hot chocolate, and the occasional pint of Belgian beer.

Every European capital city is home to a national art gallery, and Brussels is no exception. The Royal Museums of Fine Arts of Belgium are two museums in one. One part is the Museum of Ancient Art, and the other is the Museum of Modern Art. Some of the most noteworthy items in the collection are works by Peter Paul Rubens, Anthony van Dyck, Auguste Rodin, Henry Moore, Paul Delvaux, and René Magritte. Plan on taking at least 2 hours to see the highlights of the collection.

There are two things you can’t get wrong when it comes to food in Brussels: waffles and beer. For the best waffles, get yours Liège-style (featuring rough edges, dense batter, and little chunks of hard pearl sugar in the dough) when possible. Locals might deny it, but they usually opt for Liège-style waffles as well! If you opt for Brussels-style waffles, which are similar to the classic fluffy square waffles North Americans are familiar with, go easy on the toppings. A simple drizzle of chocolate is all you need. Waffles only cost a few euros, but you can generally save about 25 percent if you patronize a shop farther away from major attractions like Grand Place.

As is true of waffles, the best beer in Brussels is never on Grand Place and always served in smaller establishments. Belgium has been brewing delicious beer for centuries — this is not the place to inquire about Bud Light. But feel free to ask the staff members for their recommendations based on what you usually drink at home. When in doubt, choose the most local brew.

Overall, in Brussels you can expect a high standard of food and drink, but there’s one place to avoid, at least when it comes to eating. Rue des Bouchers is Brussels’s infamous restaurant street. Tourist-focused restaurants do their best to outdo each other in an effort to get your attention. Expect giant menus, “friendly” staff members desperate for your business, inflated prices, and average food. It’s a fun place to walk after you’ve had a delicious meal elsewhere! Try filling up at one of these places before you go.

Does Manneken Frites serve the best French fries, or frites, in Brussels? Probably not. But its fries are pretty good, and they’re just a few minutes from Grand Place. Plus, there’s a good selection of sauces, and the pun in the name is deserving of bonus points.

Cozy and family-friendly, this restaurant is famous for serving fresh mussels in season. However, those who don’t love seafood will appreciate that La Villette also offers a long menu of French and Belgian specialties, including beef, chicken, and pork.

Brussels is truly a pan-European city, and its food scene is diverse. Case in point? Restaurant Maxburg, generally regarded as the best German restaurant in Brussels. Lentil soup with sausage, spaetzle pasta with cheese and onion, and cheese and meat plates are popular here. (Note: Restaurant Maxburg will be closed until December 2020.)

Yes, they really do serve pigeon at Le Pigeon Noir. Yes, it is delicious. Come here for masterful takes on rustic Belgian food.

This is the spot for exquisite Flemish-style shellfish. The chef’s mother is in charge of peeling the tiny shrimp to make Le Vismet’s famous shrimp croquettes browned with butter.

Comme Chez Soi provides a perfect blend of great food, beautiful setting, and flawless service. The food is French-Belgian-global fusion, and the restaurant might just serve the best bites of your trip.

Drinks at Le Cercueil (also known as The Coffin Bar) are served in stone skulls, and the cocktails have names like “Bat’s Hemoglobin.” If you’re the rare person who doesn’t like Belgian beer, this funky bar will preserve your sanity.

From diamonds polished in nearby Antwerp, Belgium, to pencil erasers in the shape of Manneken Pis, there’s a souvenir for everyone in Brussels. No matter how much you like or dislike shopping, don’t leave without treating yourself to a little box of chocolate.

In general, Brussels’s best chocolate shops are small and bespoke. While there’s nothing wrong with going a bit crazy in one of the giant chocolate emporiums (let’s face it: We’ve all been there!), you will get the best flavors, service, and experience in smaller shops that specialize in just a few styles or flavors. If there’s a kind of confectionery you’ve never seen before or a flavor combination that seems a bit unusual, go for it.

Since 1847, this is where Brussels’s glitterati have shopped. The Galeries Royales Saint-Hubert are home to fashionable shops, auditoriums, cafés, restaurants, and apartments. Even if you have no intention of buying a thing, go for the experience — the architecture is sensational.

Located in the Galeries Royales, this glorious chocolate shop is a place for endless indulgence. Its claim to fame is the invention of the Belgian praline, but that’s not the very specific purchase I had in mind. Head to Neuhaus for a cup of hot chocolate. Insanely rich and thick, this will put every other hot chocolate you’ve had to shame. The staff often serve it with a tiny macaroon on the side as an added treat. To save 2 euros, take your cup to go.

The Place du Grand Sablon is known for great chocolate shops and fine antiques (usually not in the same establishment, but you might get lucky!). Pierre Marcolini, Godiva, Wittamer, and Leonidas are just a few of the popular chocolate brands here. On weekends, the square is home to a book and antique market.

Brussels’s answer to Champs-Élysées and Fifth Avenue, this is where all the top European designers have set up shop. Gucci, Prada, Chanel, and Dior are just some of the major names here. 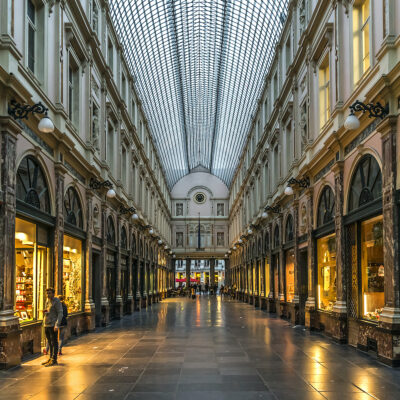 Brussels10 Interesting Sights You Must See In Brussels 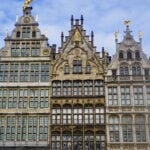