If you know where to go and when to go there, New York City is full of bargains. Expensive museums and art galleries occasionally open their doors for free programming. There are no-cost public events, like festivals and fairs. Bargain hunters know which markets have the best deals on certain days, and savvy foodies maintain an ever-growing list of cheap eats. But sometimes it’s best to keep things simple. These remarkable museums, memorials, monuments, and galleries are always free, and they’re all well worth checking out.

The American Folk Art Museum is home to the largest and most prestigious collection of American folk art in the world. It contains items dating from the 18th century to the present day and is dedicated to all aspects of folk art, from weather vanes to sculpture to sewing. The museum is famous for its special exhibits, which in the past have highlighted everything from the cartography of quilts to fables and fairy tales. The museum also offers numerous free events, including children’s programs, concerts, docent-led tours, and more. Note that it is closed on Mondays.

Who says that American history is all about Washington, D.C.? Federal Hall National Memorial is where George Washington took the oath of office, and it was the first United States Capitol Building. The Bill of Rights was passed there, and the site was home to the first Congress, Supreme Court, and Executive Branch offices. The current structure, a former customs house built in 1842, served as part of the U.S. Sub-Treasury.

If all this history is making your head spin, you’ll want to take one of the site’s many free tours. And if you like your history with a side of fun, you’ll be happy to know that the museum participates in an annual Night at the Museums event, offers special programming on Independence Day, and houses interesting exhibits (including one on the life of Alexander Hamilton). Note that the museum is closed on Sundays.

It seems especially fitting that the final resting place of President Ulysses S. Grant and his wife, Julia, is a national memorial administered by the National Park Service. Grant himself famously established the first national park in the United States, Yellowstone National Park, in 1872. Of course, Grant is also remembered for his role as the final commander of the Union Army and for his administration’s focus on reconciliation. A visit here is a moving experience.

Museum At The Fashion Institute of Technology (FIT)

Be sure to dress to impress when you visit the Museum at the Fashion Institute of Technology (FIT), the only museum in New York City dedicated to fashion. The exhibits are fascinating, exploring subjects such as the difference between minimalist and maximalist fashion and how Paris became known as a style icon. Occasionally, the museum hosts special events and lectures by designers or other notable names in the industry. Visitors should be aware that there are strict rules regarding bags, photos, and even using pens in order to protect the fragile textiles. Note that the museum is closed on Sundays and Mondays. From Tuesday through Friday, it is open until 8 p.m. — it’s one of the few free museums in the city with regular evening hours.

Part of the Smithsonian Institution, the National Museum of the American Indian — New York is located within the Alexander Hamilton U.S. Custom House. The museum is committed to advancing knowledge and understanding of the native cultures of the Western Hemisphere and working to preserve native customs and culture. There are regular free tours of the collection and of the building, and the museum hosts free public events, including films and dance and musical performances. The museum’s gift shop was once the custom house’s cashier’s office, and there are still some original details on display.

The building you’ve probably casually called the New York Public Library is actually one of more than 80 public libraries in the city. The iconic building known and loved around the world, with its Beaux-Arts design and marble lions, is actually called the Stephen A. Schwarzman Building, and it’s still a working research library today — as well as an incredible architectural gem. If you’re not popping in to do some reading or writing (the library is one of many places in New York City that offer free Wi-Fi), you can join a docent-led tour to see the building’s highlights. A tour is the only way to see the many areas with restricted access.

Free hour-long tours are available Monday through Saturday at 11 a.m. and 2 p.m. and on Sundays at 2 p.m. Tours depart from the reception desk in Astor Hall.

The New York Transit Museum, located in a decommissioned subway station in Brooklyn, has a reasonable admission fee of $10 per adult. However, the Gallery Annex and Store in Grand Central Station is absolutely free. You can find it just off the Main Concourse in the shuttle passage next to the stationmaster’s office. It hosts rotating small exhibits on the history of the city and its transportation and has a really cool shop as well. It’s not so much a destination you need to add to your itinerary as an often-missed mini-museum of sorts that is well worth showing up early to the station for.

While many presidents lived in New York City for a time, Theodore Roosevelt was the only president who was born and raised there. This handsome brownstone townhouse is actually a reconstruction of the house he was born and raised in — the original Roosevelt birthplace was demolished in 1916. Today, the rebuilt home contains five period rooms, furnished in large part with originals donated by the president’s sisters and wife, plus two museum galleries and a bookstore. You can visit the museum’s galleries and bookstore at any time, but if you want to see the period rooms, you’ll have to do so on a free tour. They’re offered on the hour starting at 10 a.m. Note that the museum is closed on Mondays and Tuesdays.

The beautiful Socrates Sculpture Park was once an abandoned landfill and a real eyesore. But in the 1980s, it was turned into an open-air studio and exhibition space for artists. Since then, the community park has grown into a huge outdoor museum. It offers family programming, like free movies every Wednesday evening during July and August; artistic exhibitions; and much more. In addition to the artwork, the park also boasts beautiful gardens, with more than 90 species of flowers and trees represented.

The Harbor Defense Museum, located on the grounds of Fort Hamilton, details the history and evolution of New York’s coastal defense systems and is a must-see for military buffs. While Fort Hamilton is the second-oldest continuously garrisoned federal post in the nation (West Point is the oldest), it has never experienced a battle, and its peaceful history has helped preserve the grounds and the artifacts in the museum. It’s home to a fine collection of military artifacts dating from the Revolutionary War to World War II. Be sure to learn about the secret tunnel that connected the fort to another nearby base, and the service of Robert E. Lee, who was stationed at Fort Hamilton before the Civil War. Note that the museum is closed on Sundays. 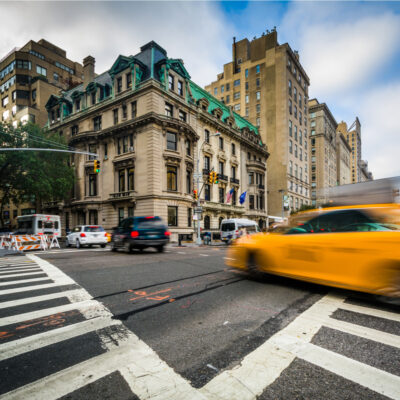 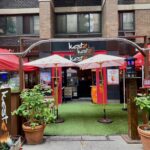 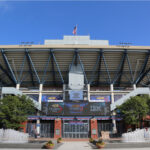 New York City17 Things To Know Before You Go To The US Open Tennis Championships
Feeling Inspired? Book This Trip