6 Excellent Things To Do In San Antonio, Texas

San Antonio, Texas, the seventh-largest city in the United States, is best known for its iconic Alamo and River Walk, its delicious Tex-Mex food, and its historic Spanish missions. Whether you’re interested in history, art, food, or shopping, San Antonio has something for you.

Here are six excellent things to do during your time in this beautiful old Texas city.

Remember the Alamo! Everyone has heard this cry, but to truly understand it, you must visit the legendary battleground.

Initially, the Alamo was known as Mission San Antonio de Valero; it was founded by Franciscan missionaries in 1718 as a center for Christian evangelization. In 1793, the missionaries departed from the area, and the building was largely abandoned.

During the first few decades of the 19th century, the building changed hands between the Spanish, the Mexicans, and the Texans. In 1835, 200 Texans decided to rebel against the Mexican government, resulting in the Battle of the Alamo in February of 1836. Although the battle ended in defeat for the Texans, it played an important role in Texas’s fight for independence.

Today, you can walk through the Alamo and read the signs that describe the purpose of each room. There’s even a model of the Alamo showing what the building looked like at the time of the famous battle. Outside, you can watch the History Channel’s informational segment, peruse the artifacts in the museum, and talk to living-history actors performing a firing demonstration. Admission to the site is free.

The Alamo is just one of five Spanish missions in San Antonio. The other four missions are located at the San Antonio Missions National Historic Park, and they are also free to visit.

Although officially established as a park in 1899, the Brackenridge Park area has been used by humans for more than 11,000 years. Now, the 343 acres of space are home to many of San Antonio’s favorite attractions, including the San Antonio Zoo, Japanese Tea Garden, The Witte Museum, and the San Antonio Botanical Garden.

Although some of the attractions charge for admission, the park and trails are free to the public. Located just 10 minutes from downtown San Antonio, Brackenridge Park is easily accessible and the perfect place to golf, walk, bike, picnic, or simply enjoy the outdoors. If you get tired of walking, you can ride between the park’s attractions on the train built for both children and adults.

Just a 5-minute walk from the Alamo, the San Antonio River Walk winds through the center of the city between narrow streets and tall buildings. As you walk from the street level down a short flight of stairs, you’ll come upon a scene not unlike the canals of Venice. The doors and windows of the restaurants are wide open, with tables spilling out onto the walkway. Friendly waiters greet passersby with a menu and an enticing offer to taste their cuisine.

You can see the River Walk from a different perspective by taking a GO RIO cruise. The 35-minute narrated cruise takes visitors through the central River Walk and highlights each historic building. The stories provide a glimpse into the long history of San Antonio. GO RIO also acts as a shuttle and can transport you from downtown as far as the Pearl District for just $12 per day.

The River Walk stretches for 15 miles, and the touristy section in downtown is just a small part. Walk either north or south from the center to enjoy thoughtful landscaping and integrative art pieces.

4. Indulge At Trendy Eateries In The Pearl District

The Pearl District is a 12-acre neighborhood located 2 miles up the San Antonio River from downtown. It’s a trendy area known for its innovative restaurants, one-of-a-kind boutiques, and weekly farmers market.

This district gets its name from the still-standing Pearl Brewery. The main building has been converted into an upscale hotel, where remnants of the heavy brewing machinery still stand in the lobby. The associated buildings have been converted into stylish bars, restaurants, a food hall, and a Culinary Institute of America campus.

5. Appreciate The Arts In Southtown

Every city has a sanctuary for creatives, entertainers, and artists. In San Antonio, Southtown is that sanctuary. The arts district encompasses the neighborhoods of Lone Star, Roosevelt, King William, Lavaca, and Collins Garden. In this area, you can enjoy public art, museums, and art galleries.

Southtown is home to San Antonio’s longest running artwalk; it’s hosted at the Blue Star Arts Complex on the first Friday of every month. A series of warehouses converted into art galleries, shops, and restaurants, Blue Star opens its doors to art lovers, and the artwalk is popular with locals and visitors alike. Access to the galleries is free of charge on the first Friday of every month. Even if you’re not attending then, this revitalized area is worth a visit.

After perusing exhibitions at various galleries (including Blue Star Contemporary, the longest-running nonprofit exhibition space for contemporary art in San Antonio) and enjoying the live music and art vendors at Brick, enjoy a craft brew at Blue Star Brewing Company. Across the river from Blue Star is another Southtown gem, the King William Cultural Arts District, where you can stroll down streets lined with the grand 19th-century homes of German immigrants.

6. Soak Up The City’s Culture At The Historic Market Square

About half a mile from the downtown section of the River Walk is the colorful El Mercado, or the Historic Market Square. Street vendors peddled their wares in this area long before the permanent structure was constructed in 1900. Now, shops filled with souvenirs, handmade goods, and vibrant pottery line both sides of the pedestrian plaza.

As you approach the market, you’ll hear mariachi and Tejano music echoing from the outdoor stage. Multicolored papel picado — perforated paper banners — and patio lights sway overhead, adding to the festive atmosphere. Enjoy the shops, eat at any of the restaurants, and grab a cold horchata at a nearby stand as you people-watch in the square.

Named America’s most affordable foodie hot spot in 2018 by WalletHub, San Antonio is home to an ever-growing number of fantastic restaurants. From incredible hole-in-the-wall spots to high-end restaurants, the food scene continues to flourish. Here are some of our favorite spots.

Located in the Historic Market Square, Mi Tierra Café y Panadería isn’t as impressive on the outside. However, not only is the food amazing, but the interior provides an incredibly festive ambiance.

Upon entering the restaurant, you’re welcomed with a beautiful floor-to-ceiling ofrenda, or altar built to honor ancestors, in the front hallway. In the next room, a spacious bakery, shiny, multicolored piñatas hang from every inch of the ceiling. From there, you can either get a cold cerveza from the Mariachi Bar or head into the restaurant for Tex-Mex favorites like queso, enchiladas, and fajitas.

No visit to Texas would be complete without a hearty plate of barbecued meats. To get your barbecue fix in San Antonio, head to the Smoke Shack. Featured on Guy Fieri’s Diners, Drive-Ins and Dives and in Texas Monthly, this spot has racked up the accolades since its founding in 2010.

Originally a food truck, Smoke Shack now has a permanent location just north of the Pearl District. It’s a classic barbecue joint with wooden tables, a few booths, and a long counter and order line.

The food, as evidenced by the restaurant’s rapid growth, is exceptional. Smoked over oak and pecan wood and with hints of coffee in the barbecue rub, the meat is anything but ordinary. The chef, Chris Conger, attributes this to the fact that he makes everything from scratch and in-house. For tangy barbecue sauce, spicy creamed-corn sides, and melt-in-your-mouth meats, Smoke Shack is a must-visit.

Just a short walk from the River Walk is Chart House, a luxurious, revolving restaurant at the top of the Tower of the Americas. Due to the flat Texas landscape, you can see for miles.

While you enjoy the delectable seafood menu featuring dishes such as shrimp and crab fondue, cedar plank salmon, and lobster and shrimp salad, you’ll rotate 360 degrees. Within the course of your meal, you’ll enjoy spectacular views of the Alamo City from all angles.

In addition to the mouthwatering dishes, the restaurant offers great drinks. The bar is open for happy hour from 4:30 p.m. to 7 p.m. Monday through Friday. Small plates start at $4, and drinks start at $5.

From popular department stores like Macy’s to one-of-a-kind shops, San Antonio has it all.

Situated on the River Walk, the Shops at Rivercenter include more than 100 stores, a movie theater, and almost 40 restaurants. After shopping to your heart’s content, you can dine at Margaritaville, Fogo de Chão, or Yard House for views of the River Walk and the passing GO RIO cruises.

For a unique shopping experience, visit La Villita Historic Arts Village, San Antonio’s first neighborhood. It’s full of artisan boutiques, studio galleries, and local jewelry. Whether you’re looking for a small keepsake or a statement-making painting for your living room, you’re sure to find it at La Villita.

For additional handmade goods or imported Mexican items, the Historic Market Square is the place to go. 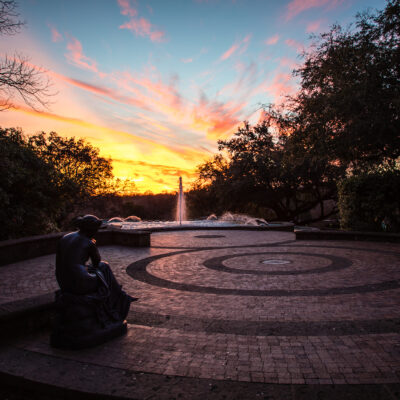 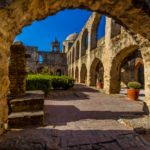 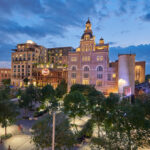 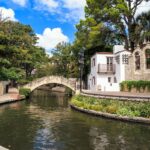