Palma De Mallorca: The Best Things To See And Do

Palma is a resort city and the capital of Mallorca, a destination that’s been attracting snowbirds and other like-minded travelers from across the globe for decades. Some of the city’s most well-known attractions are the Cathedral of Santa Maria of Palma, Bellver Castle, and the fortress known as the Royal Palace of La Almudaina.

It’s also no secret that Palma is home to some of the most stunning beaches in the world, and travelers can spend days seeking out the best and most hidden coved beaches on the island.

If you’re visiting the area and are curious what else you can do there, continue reading to discover the best things to see and do in Palma de Mallorca.

Cathedral Of Santa Maria Of Palma

A Roman Catholic cathedral in the Levantine Gothic style, the Cathedral of Santa Maria of Palma, otherwise known as the Catedral-Basílica de Santa María de Mallorca and commonly referred to as La Seu, has a history dating back to the 13th century.

Mallorca’s only cathedral was built on the clifftop where the city of Palma was founded by the Romans. The building is known for its German-style hall layout. Before the 1960s, the church was reflected in the sea, which came up to the city’s walls; when construction around the church changed that, a saltwater lake was constructed in the Parque del Mar to reproduce the effect.

The Cathedral of Santa Maria of Palma is open daily year-round. Admission to the cathedral costs 7 euros.

Built in the 14th century for King James II of Majorca, Bellver Castle is yet another stunning piece of Gothic architecture in Palma. It is situated on a hill about a mile west of the city center.

Known for being one of the few circular castles in Europe, Bellver Castle overlooks the city and has a long and rich history. For many centuries, the castle was used as a military prison. Today, it is home to a museum of municipal history where you can find pottery and other artifacts from the city’s Talaiotic, Roman, Arab, and Spanish periods.

The Royal Palace of La Almudaina, or Palau de l’Almudaina, is a 10th-century Muslim fortress that was rebuilt by Christians in the 13th century in the Gothic style. Overlooking the Bay of Palma, the royal palace remains one of the city’s main attractions.

Visitors can wander through the stunning palace, exploring its grand rooms featuring Gothic arches, period furnishings, and tapestries. Today, the palace is the official residence of the king and queen of Spain (though they tend to stay at their Marivent residence).

An experience like no other, the Sóller Railway, known in Palma as the Tren de Sóller, is a railway extending from Palma to the town of Sóller. The railway is known for its narrow track gauge of just 3 feet.

The train to Sóller runs along a picturesque route through the Alfabia Mountains. In just about 4 miles, the track rises more than 650 feet, runs through 13 longitudinal tunnels, and crosses over several bridges.

From April through October, the train from Palma to Sóller runs six times daily, and from November through March, it runs four times daily. A one-way fare costs 25 euros.

For more information and for timetables, visit the Sóller Railway’s website.

One of the most popular beaches in Palma, Cala Major is located on the bay closest to the city center. The beach’s coastline is more than 650 feet long.

Divided into two parts by a small pier, Cala Major is an ideal destination for sunbathing, people-watching, chasing waves, and playing in the sand. The beach is surrounded by a large resort, and the area is home to a variety of hotels, restaurants, and bars.

The beach is fully equipped with public showers, toilets, and ramps and has lifeguards on duty.

The Palma Aquarium invites visitors to explore the vast underwater world with its collection of 55 tanks, home to more than 700 different species from the Mediterranean Sea and the Indian, Atlantic, and Pacific Oceans.

At the Palma Aquarium, visitors can feed sharks, snorkel with stingrays, engage in water balloon fights, observe the jellyfish tank, or take a tour of the Big Blue exhibit on the incredible Shark Vision Boat.

Each region of Spain is known for having at least one unique dish: octopus (pulpo) in Galicia, slow-cooked stew (magra) in Murcia, paella in Valencia, and cold tomato soup (gazpacho) in Sevilla. Mallorca is no exception to this rule, and you must try the following dishes when visiting this unparalleled Balearic island.

It’s hard to go wrong with a combination of fried eggplant, red peppers, tomatoes, olive oil, and garlic. Tumbet mixes all of these ingredients, making for an incredibly rich and mouthwatering ratatouille-esque dish.

When I visited Palma two years ago, the one thing I remember locals ranting and raving about was fresh, Mallorquin bread called llonguet. Light, crunchy, and characterized by a deep crack in the middle, this simple yet delicious bread can be enjoyed in a number of ways: as a sandwich (bocadillo), dipped in soup, or simply on its own!

Arroz brut — or “dirty rice” in Mallorquí, a local variant of Catalan — is Palma’s take on Spain’s beloved paella. A delicious mix of meat and vegetables, arroz brut differs from paella in that it is made in the caldoso style — meaning that it is cooked with lots of water, making it a bit soupy. Arroz brut is traditionally cooked with saffron, paprika, cinnamon, pepper, clover, and nutmeg.

Palma is home to many shopping streets, the most famous being Passeig del Born. This stunning tree-lined boulevard is known in Palma as “the Golden Mile.” It is home to high-end stores like Louis Vuitton and Hugo Boss as well as European favorites like Zara, Zara Home, and Loewe.

If you’re looking for souvenirs to bring back home, head to Plaza Mayor. Plaza Mayor is situated in the heart of Palma’s Old Town and is surrounded by quaint Spanish shops. This bustling area is filled with restaurants, outdoor cafés, art galleries, and street artists. Here travelers will find local crafts and produce — everything from famous Mallorquin pearls to traditional Spanish foods. 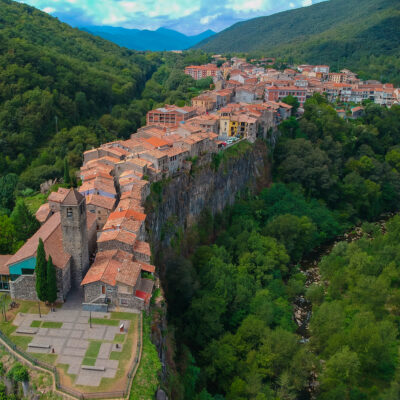 Spain15 Reasons To Fall In Love With Beautiful Malaga, Spain