Incredible Places In Slovenia: Ljubljana And Beyond

Cristina Luisa
What Are Your 2023 Travel Plans?

Between Italy, Croatia, Hungary, Austria, and the Adriatic Sea lies a small country teeming with natural wonders and cultural richness. Slovenia, with a population of just over two million people, is a nation with a history dating back to the 5th century, far before it was established as part of Yugoslavia.

Now, with less than 30 years of independence under its belt, this Balkan country is recognized as a multi-faceted holiday destination. With medieval architecture, expansive lakes, snow-peaked mountains, and some of Europe’s deepest caves, this is the perfect place to spend your vacation in Central Europe.

In this article, we’ll explore the incredible attractions in Slovenia you can’t afford to miss.

Also known as the City of Dragons, Ljubljana is the capital of Slovenia. Home to 288,000 people, this dynamic city may be small, but it has everything a metropolis could offer. Set between the Alps and Karst, it is the economic, political, and educational center of Slovenia. Ljubljana is also a filled with incredible cuisine, stunning architecture, and mysterious folklore.

This green city was noted as one of our top destinations in the world for solo travelers. But regardless of whether you’re going it alone or bringing the family in tow, you’ll find Slovenes to be welcoming, curious, and eager to show you a good time in their city.

For ultimate views of Ljubljana, and the Ljubljana Castle, head to the Neboticnik Skyscraper. This building is a destination in and of itself because of its sleek architecture and history. Standing at 70 meters high, it was the tallest building in Yugoslavia, and the seventh-tallest in Europe, when it was built in 1933.

After entering the skyscraper, either walk up the 12 flights of the elegant spiral stairway or simply take the elevator. Once you get the top, you’ll reach the rooftop terrace, which is also a restaurant and café. It’s the best place to take in the stunning panoramic views of the city.

Perched atop Castle Hill is one of Ljubljana’s main draws: the predjama itself. Visible from many sections of the city, Ljubljana Castle dates back to the 11th century and boasts the architecture typical of a medieval fortress. Countless art exhibitions are shown within its courtyard, in addition to its two museums, which focus on puppetry and Slovene history. Take a look at the painted chapel and be sure to try traditional Slovene fare at the Gostilna na Gradu restaurant.

From the vantage point of the tower, the views of the city are spectacular at any time of the day. However, given the chance, sunset and the subsequent lights of the city are breathtaking. If you haven’t fallen in love with Slovenia yet, a visit to this enchanting castle will surely enamor you.

Landing in Ljubljana, the Dragon City, without heading to the Dragon Bridge would be travel blasphemy. Built in the early 1900s, its Art Nouveau style was masterfully composed by the architect Jurij Zaninovic. Four (now green) copper dragons sit on each edge of the road bridge, which was also Ljubljana’s first braced concrete structure.

It’s no secret that Slovenians love to celebrate. And by this, I mean they love their spirits. They’re known for their vineyards; it’s a tradition that’s been in place for hundreds of years. While wine-makers produce over 60,000 liters of wine every year, craft beer is a rising star in the libation scene. Do yourself a favor and skip the mass-produced brands like Laško and Union.

There are many, many bars in Ljubljana, and most of them offer a variety of craft pivo on tap. My favorites are the Reservoir Dogs and the Human Fish IPA (a nod to the cute underwater creature that lives in the Postonja Caves). Most draft beers are about €3-4, and happy hour is very common in the city. Na zdravje! (Cheers!)

No trip to Slovenia would be complete without visiting its massive grottos and underground wonderlands.

Located just 40 minutes southwest of Ljubljana by car, the Postojna Caves will leave you fascinated (even if you’re not particularly interested in geology). The caves were accidentally discovered by a local man named Luka Cec in the early 1800s; he began giving tours in 1819. The cave system is over 15 miles in length, making it the country’s second largest and Europe’s top cavern destinations.

Also known as the Postojnska Jama in Slovenian, these limestone formations are breathtaking. In 1872, the world’s first underground cave railroad was established, and you can still take the train through the surreal subterranean chambers. Look up at the Murano glass chandeliers — imported from Washington State. Head to the Vivarium to spot the elusive Olm, or human fish, which lives over one hundred years and has evolved into a blind, nearly transparent body. Also, don’t miss the concert hall — easily as bizarre as the cave’s stalagmites and stalactites — where you can sing your heart out with a chorus of a thousand echoes.

Just an hour and 15 minutes northwest of the capital city, you’ll find the picturesque Lake Bled. Set amidst the Julian Alps, this body of water is a destination worth the trip just for its stunning vistas, no matter the season. (As impressive as the pictures are, it’s even more breathtaking in person.) If you’re planning a honeymoon, a romantic picnic, or simply a getaway with your family, this is the place to visit. Remember, however, that it can get quite busy, so book your lodging and tours in advance.

If you want to get active, there are so many activities that you could spend your entire vacation in Slovenia here. For example, rent a kayak to paddle through its pristine, sea-green waters. Arrive at the Pilgrimage Church of the Assumption of Maria, the infamous island place of worship, where you can ring the wishing bell and admire its golden facades. If you come during the summer, bring your swimsuit to wade through the lake or try stand-up paddle boarding. No matter the season, take the steps up to the Bled Castle, with its gothic architecture dating back to the 11th century. As it looms over 300 feet above the lake, its views are not to be missed.

Slovenia is definitely an up-and-coming destination, so head there now before it becomes another postcard cliché. You won’t regret it! 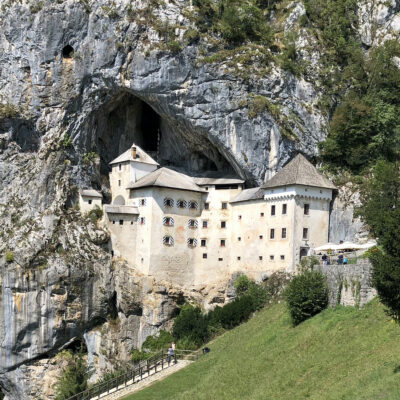 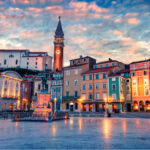