How To See The Rhinoceros In Zambia

What do unicorns and rhinoceros have in common? More than you might think! They’re both creatures at the center of lore and mythology. People have gone on extraordinary quests to find them. They’re both rumoured to have remarkable powers. And, of course, they both have majestic horns!

Unlike unicorns, rhinoceros are real — but they are perilously close to fading into the stuff of legend. Those magnificent horns are literally worth their weight in gold to poachers. Critically endangered and hunted nearly to the point of extinction, these wily, shy creatures are rarely seen in the wild. And safari participants are often disappointed that the elusive, gentle giants evade detection.

However, some limited opportunities exist to see them in the wild through special national parks programs, and I was fortunate enough to come face to face with rhinoceros on a special walking safari in Mosi-oa-Tunya National Park in Zambia

Mosi-oa-Tunya National Park shares the mighty Victoria Falls with its counterpart in Zimbabwe, Victoria Falls National Park. One of Zambia’s smallest parks, Mosi-oa-Tunya is split into two sections. One sector grants access to Victoria Falls itself (and is home to the terrifying natural infinity pool known as Devil’s Pool. ‘Nuff said!). The second sector serves as a traditional game reserve. And it’s this area that 11 beautiful white rhinoceros call home.

How to find the rhinos

However, one simply does not arrive at the park gates and ask for an audience with the regal beasts. Nor do you book a general game drive and hope to get lucky. No, to be sure of seeing the rhinoceros, you have to walk — yes, WALK — to see them. And it was with equal measures of excitement and trepidation that I did exactly that.

If the idea of walking out to see big game has you imagining Elmer Fudd sneaking up on Bugs Bunny, well, you’re not entirely wrong. You will indeed be treading carefully, speaking lightly, and slowly inching closer and closer toward an animal with extra large ears and extraordinarily good hearing. Thankfully, with rhinoceros involved, there are far fewer fiascos that what you might have seen on TV! And there’s an expert guide and park rangers by your side every step of the way.

A rendezvous with the rhinoceros starts at the crack of dawn or, in some cases, the early afternoon. Visits must be booked in advance, and any Livingstone or Victoria Falls based hotel can help arrange your tour.

Only a few select tours operators provide rhinoceros walk experiences, but nearly all area tour companies will act as a reseller, and costs range from $80 to $105 per person. Such third-party booking arrangements almost always go smoothly, but if you have particular requests or concerns, it’s wise to confirm exactly who is responsible for your visit. And in all circumstances, get crystal clear information on whether or not the National Park entrance fees are included in the tour costs. Park admission is $20 so it pays to enquire!

In nearly all cases, meals aren’t included in the tours, but cold drinks like water and soda are provided.

What to expect on your game drive

Your first challenge of the day won’t be sneaking up on a ‘wascally rhino’ but trying to launch yourself gracefully into the back of the Land Rover which takes you through the park. Rhinos might look like a rather cumbersome animal, but I swear no creature was as awkward and unwieldy as I was, trying to catapult myself into my seat. Finally, secure on my perch, it was time to start the adventure!

I selected a tour that combined a classic game drive with a short walking component, but depending on the company in question, your initial game drive may in fact be a game walk, dramatically increasing the time spent on your feet. In either case, thorny brush is all around. Sturdy sneakers, long trousers, and generous applications of sunscreen and bug spray — topped off with a shade providing hat — are ideal.

While I was yearning to see the rhinoceros, I was soon completely captivated by the other animals who call Mosi-oa-Tunya home. Spying a small group of elephants soon after we passed through the park gates made my heart soar. Hello there, handsome guys! Before long, we also passed adorable warthogs, graceful impala, some distant zebras, saucy monkeys, and delightful giraffes. And don’t even get me started on the birds! There were so many, from massive vultures to playful hornbills.

Thankfully, our guide was pro. He could easily identify every bird, animal, and plant we saw, and was a constant source of facts and information. Breaking by the river for a short refreshment stop, he brought us down to the water to better explain animal migration patterns during the wet and dry seasons. And throughout the morning, he was peppering us with information about rhinoceros. Finally, the time had come to stop chatting and start walking!

Walking with the rhinos

We were met by two armed park rangers who were both seriously intimidating and extremely reassuring. Their menacing weapons weren’t just for our protection in case one of the rhinoceros decided to go rogue. They were also on patrol for poachers, the enemy of every rhino on earth and especially of the 11 precious animals in Mosi-oa-Tunya. Two rhinoceros had been killed just a month prior to my visit.

However, hope is on the horizon. Should a suspected rhinoceros pregnancy come to fruition, the group may possibly be split into two separate crashes. (Yes, a group of rhinoceros really IS called a “crash”!)

But during our visit, there was no crashing to be seen, only dedicated chewing and chomping as tasty green shoots were enthusiastically devoured. Utterly engrossed with their meal, the proximity of humans didn’t interest them in the least. And, hey — who can’t relate to being utterly preoccupied with food? Between their focus on their meal, the armed guards, and the natural barrier formed by some felled trees, we were completely secure and relaxed as we watched the rhinoceros in their natural habitat.

And what a sight it was! They were INCREDIBLE! They couldn’t have been more mellow, and I found their presence to be calming, even peaceful. I couldn’t take my eyes off them, especially the juveniles. They were delightful! The game drive was wonderful, but the chance to have such a personal audience with wild rhinoceros was a travel moment I will never forget.

Unicorns might be more trendy, but absolutely nothing compares to the real world magic of the rhinoceros. 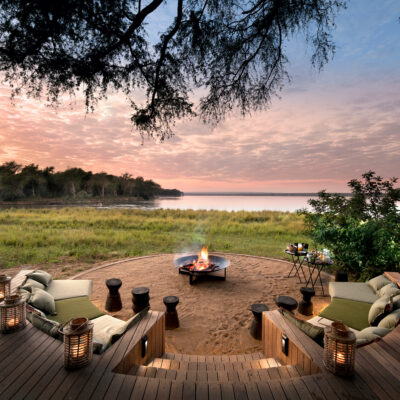