8 Exciting Things To See And Do In Vienna

There’s something enchanting and romantic about Europe as a whole, something that attracts millions of visitors per year from every corner of the globe.

As someone from the U.S., the part of Europe I was most drawn to before visiting was its architecture. Being from a country that is just over 200 years old, the fact that Europe’s history dates back thousands of years and many of its buildings from this time still remain was simply astonishing.

It seems that whenever I talk to people who are planning to take their first big overseas trip, the first place they always want to visit is Europe. Centuries-old structures like the Parthenon in Athens and the Colosseum in Rome portray a sense history that simply cannot be found in North America.

Though it may not be as popular a destination as Rome, Athens, or Paris, Vienna, Austria is a city that anyone interested in Europe’s mind-blowing architecture should visit. The Habsburg Dynasty alone erected some of the most stunning buildings in Vienna, and the city houses hundreds more breathtaking architectural achievements — its museums, neighborhoods, parks, palaces, cathedrals, opera houses, and government buildings.

Don’t miss out on the following 8 things to see (and do) when visiting the extraordinary Austrian Capital.

I spent my 40th anniversary in Vienna. It was incredible, so beautiful, made for walking, with plenty of great restaurants, wine, music and historical museums. … Gardens around the palace were in bloom, and in the heat, the smell of roses and other flowers perfumed the air. The icing on the cake was a stay at the impossibly romantic Hotel Imperial.
— Alison Abbott, writer, Green With Renvy

A major tourist attraction since the ’50s, Schönbrunn was the main summer residence of the Habsburg rulers, one of the most prominent and influential monarchies in Europe’s history.

The Palace’s Imperial Tour takes you through the different stylistic eras of the imperial monarchy and the lives of the palace’s inhabitants. This tour includes the palace’s state rooms and the private apartments of Franz Joseph and Sisi. It costs €14.20 for adults, and visitors are encouraged to buy their tickets online in advance.

On the Grand Tour, visitors are led through the precious 18th-century interiors from the time of Maria Theresa, walking through the Feketin Room, Gobelin Salon, and the Vieux-Laque Room, a memorial chamber commemorating the death of the Emperor Francis I. Tickets for this tour are €20.50 and can be purchased here.

Another piece of distinguished Austrian architecture, the Belvedere was constructed by famous architect Johann Lucas von Hildebrandt, consisting of two Baroque palaces — the Orangery, and the Palace Stables.

Built as a summer residence for Prince Eugene of Savoy, Belvedere’s architecture is characterized by its decorative tiered fountains and cascades, its majestic wrought iron gates, and its Baroque structures encompassed by vast and vibrant gardens. The Belvedere’s gardens and Upper and Lower Belvedere are listed as a UNESCO World Heritage Site.

With hundreds of years of historical significance, the Upper Belvedere was once the residence of Archduke Franz Ferdinand, the heir to the throne of Emperor Franz Joseph I whose assassination triggered a series of events leading to World War I.

The Belvedere is home to Belvedere Museum, featuring the greatest collection of Austrian art from the Middle Ages to the present day, with works from renowned artists such as Claude Monet and Vincent Van Gogh.

Constructed in the 13th century with several expansions since, Hofburg is the current official residence and workplace of the President of Austria and the former principal imperial palace of the Habsburg rulers.

Hofburg’s Sisi Museum features numerous personal items that once belonged to Elisabeth, Empress of Austria and Queen of Hungary, helping to illustrate the true personality of the commonly misunderstood Empress.

The Hofburg’s Imperial Apartments were the residence of the Habsburgs for more than 600 years and the center of the Holy Roman Empire. The Silver Collection houses a wealth of objects with historical and cultural significance, such as items that were required for the court household and its organization.

The Prater, often referred to as the Wurstelprater, is one of the oldest amusement parks in continuous operation. Opening its doors to the public in 1766, the Prater is a place for nostalgic dreamers — though it’s still very much alive today.

The most stunning architectural structure in the Prater public amusement park is without a doubt Wiener Riesenrad. This historical Ferris wheel was constructed in 1945 and is made entirely of wooden cabins, standing nearly 215 feet tall. A celebrated Viennese landmark, Wiener Riesenrad is situated at the entrance of the Prater and serves as a symbol of the capital city’s second district, known as Leopoldstadt.

If you’re a music, history, or architecture buff, you won’t want to miss out on a visit to Vienna State Opera, referred to by Viennese as ‘Wiener Staatsoper.’

Vienna State Opera was originally called the Vienna Court Opera, but after the First Austrian Republic replaced the Habsburg Monarchy in 1920, it was renamed. Over the years, the Vienna State Opera has been the site of many historical events, such as an American bombardment setting the building alight at the end of World War II.

Vienna State Opera has been home to some of the world’s most renowned artistic directors and conductors, such as Gustav Mahler and Herbert von Karajan.

This celebrated opera house invites guests on guided tours, allowing visitors to catch a glimpse of the world’s largest repertoire theater and learn many interesting facts about the building’s history, its architecture, and how an opera house is run.

The most alluring characteristic of St. Stephen’s Cathedral in Vienna is its giant organ, the largest musical instrument in the entire nation. The cathedral has an old organ tradition dating as far back as 1334.

Travelers visiting St. Stephen’s Cathedral can wander through its catacombs and learn about the Habsburgs’ unique burial rituals, or check out the cathedral treasure, a collection of some of the country’s most valuable works of art accrued over the centuries.

Vienna City Hall is the headquarters of the city’s municipal administration and the site of many press conferences, concerts, and balls. It was originally constructed in 1872 by Friedrich Schmidt in a Neo-gothic style, closely resembling other Flemish and Brabant secular buildings such as Brussels Town Hall in Belgium.

A true architectural wonder, Hundertwasserhaus is an expressionist landmark, built on an idea and concept by Austrian artist Friedensreich Hundertwasser, co-authored by architect Joseph Krawina.

In 1977, Hundertwasser convinced the City of Vienna to allow him to bring his vision to life, creating a vibrant forested roof terrace house. The painter-turned-architect developed new architectural shapes, such as the “eye-slit” house and the “high-rise meadow house,” which can be seen in this uniquely designed and colorful apartment house.

If you love palaces and cathedrals, we hope this piece convinced you to put Vienna on your travel list. Happy trails! 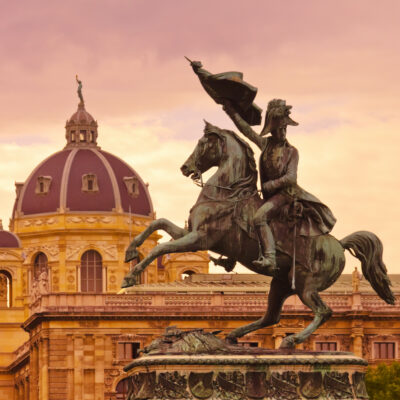 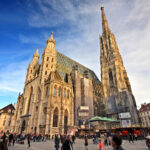 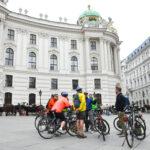 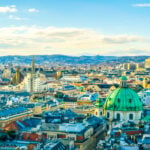