The Best Things To Do In Thailand

It was incredibly difficult to narrow down the best things to do in Thailand, and that’s because there’s just so much this incredible country offers travelers.

From Thailand’s most pristine beaches to its unique floating markets, raucous nightlife, culturally significant Buddhist temples, and environmentally-conscious elephant sanctuaries, I’ve attempted to construct a list of the main reasons people want to visit Thailand, and where you can go to partake in such activities.

Good luck on your travels to Thailand, or as the Thais say, chok dee!

Situated on southern Thailand’s west coast, Krabi Province is characterized by towering limestone cliffs, mangrove forests, and several minute offshore islands, with the Phi Phi Islands being the region’s most popular. Ao Nang and Railay Beach are two other beaches that can’t be missed when visiting Krabi.

Phuket is the place to be if you’re looking for a party, filled with high-end resorts and a vibrant nightlife with go-go bars, cabarets, nightclubs, massage parlors, and beer bars. A white, sandy, crescent beach, Patong Beach faces the Andaman Sea and is lined with cafes, bars and restaurants.

While in Phuket, be sure to take a James Bond Island Tour to the site where The Man with the Golden Gun was filmed in 1974

If you’re seeking a more relaxing alternative to Phuket, Ko Samui is the nation’s second-largest island situated on the Gulf of Thailand, known for its palm-fringed beaches and its 12-meter tall Golden Buddha statue at Wat Phra Yai.

Floating markets are a Thai tradition that formed due to communities being built at the sides of rivers, namely along the Chao Phraya River that flows through Bangkok and into the Gulf of Thailand. Damnoen Saduak Floating Market is Thailand’s largest and most popular floating market and provides insight into the country’s bygone way of life that is still prevalent today.

Bangkok and its surrounding areas are home to Thailand’s most famed floating markets, and Amphawa Floating Market in the Amphawa District of Samut Songkhram Province is the second most popular floating market near Bangkok. This is a great option for travelers wishing to indulge in a more authentic Thai floating market experience, with few international tourists and mostly Thai visitors.

Thailand has some of the best cuisine in the world, likely one of the main reasons travelers wish to visit this Southeast Asian country. Subsequently, Thailand offers an array of choice cooking classes, a must-do activity when traveling to the Land of Smiles, particularly in Chiang Mai Province.

At Thai Farm Cooking School in Chiang Mai Province, travelers are invited to an organic farm to pick their own fresh ingredients and cook traditional Thai food in an authentic and healthy manner. Thai cuisines that are offered through this cooking class are spring rolls, Thai curries, chicken cashew stir-fry, various Thai soups, and mango sticky rice.

In the early 1900s, the Akha people immigrated to Thailand from China, Laos, and Myanmar, becoming citizens and integrating their own culture and beliefs into the country.

Thai Akha Cooking School in Chiang Mai invites travelers to learn about its unique culture of roughly 80,000 people living in small villages in the mountains of Thailand, with the goal of preserving their history by passing down their traditions and unique cooking styles.

Known to foreigners as the White Temple, Wat Rong Khun in Thailand’s northern Chiang Rai Province is a bizarre yet beautifully constructed contemporary and unconventional art exhibit in the style of a Buddhist temple.

Perhaps its most peculiar feature is the hundreds of white stone hands reaching out from the ground upon entrance into the temple, one of the artwork’s many eerie characteristics. This incredibly detailed, all-white temple was constructed by artist Chalermchai Kositpipat in 1997.

Wat Arun–referred to by locals as Wat Chaeng–is situated on the west bank of the Chao Phraya River in Bangkok and is especially stunning during sunset, hence being referred to by foreigners as the Temple of Dawn.

After touring Wat Arun, travelers can take a two-minute riverboat ride across the Chao Phraya for only 40 THB and walk a short five minutes to reach Wat Pho.

Wat Pho is home to the famed Temple of the Reclining Buddha, a 46-meter long giant reclining Buddha structure that can’t be missed when visiting this cherished temple complex.

Wat Pho is one of the largest temple complexes in the city and a stunning site to see for any first-time or returning Bangkok visitors.

Alex Garland’s popular book The Beach famously quotes Khao San Road as being “the center of the backpacking universe,” and if you’re traveling to Bangkok, you’ll quickly find out why.

Lined with bars, restaurants, bright fluorescent lighting, and street vendors selling everything from clothes to crunchy cockroaches, buckets (yes, buckets) of booze, and everything in between, Khao San Road may not be for the faint of heart, but will inevitably provide you an unforgettable night on the town in the world’s most visited city.

Ian Breslin, co-owner of the travel blog Global Gallivants also points out that Khao San Road is a great central location to stay in.

“If you’re based around the Khao San Road,” he says, “…Most [attractions] are conveniently based within a short 10-15 minute walk from this central traveler’s hub: The Grand Palace royal residence and the main temple sites of Wat Phra Kaew; The temple of the Emerald Buddha; Wat Arun, just across the river from the ferry terminal; and Wat Pho and the reclining Buddha for 10 Baht across to the Khun Mae Pueak pier.”

With a country admirably known for its acceptance of its transgender population, cabaret and drag shows abound. Attending a cabaret show in Chiang Mai was without a doubt one of the most fun nightlife experiences I endured while living in Thailand, and I highly recommend it to anyone.

Chaing Mai and Phuket’s bustling Bangla Road are great places to catch a cabaret or drag show when traveling through Thailand.

Suspended on a precipice 830 feet into the air, Sky Bar in Bangkok is one of the world’s tallest rooftop bars.

When visiting Bangkok’s Sky Bar, be sure to try the popular Hangovertini, created for the cast of The Hangover Part II while they were filming at Sky Bar. Be sure you come ready to spend, though, for cocktails at this renowned rooftop bar average around $22 USD.

With locations in Chiang Mai, Phuket and Pattaya, Elephant Jungle Sanctuary is an ethical and sustainable eco-tourism project dedicated to the welfare of the region’s elephants.

Travelers embarking on this particular elephant experience can choose between morning, afternoon, full-day and overnight visits, with opportunities to feed, give mud baths and bath these gentle giants in the nearby river.

Elephant Nature Park in the Mae Taeng District of Chiang Mai Province is an elephant rescue and rehabilitation center where you can both volunteer and visit to further the well-being of the park’s elephants.

This elephant sanctuary has been involved in dozens of elephant rescues to create its thriving herd, providing a natural environment not only for elephants, but for dogs, cats, buffalo, and many other animals. 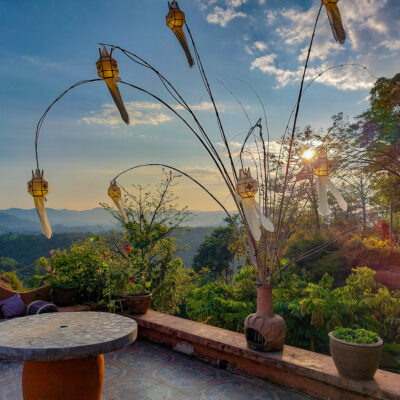