Niagara Falls: Canadian Side Vs. American Side

Niagara Falls is a two-faced destination.

Canada hosts a gracious, European-style walkway along the perimeter of the chasm. Just beyond is a tunnel to the base of the falls, a boat for visitors, and a rush of tourist distractions.

The U.S. side, ironically, is quieter. The Niagara Falls State Park operates at a low hum, offering trolleys, trails, historical attractions, lookout points, and an Aquarium. Canada runs their side of the Falls like a theme park; the US side celebrates more of the natural thunder and rush. Visitors with valid passports have a lot of choices between the two.

The Falls are plural; the American falls, near the old power plant side, Bridal Veil Falls, and the largest, Horseshoe Falls. They overlap at the international border and can be visited by tour boats from either Canada or the US. Formed by glaciers, the water feeds in from four of the Great Lakes to eventually make its way to the Atlantic. About 600,000 gallons of water rush over the precipice every second. It’s the source of about 20% of the drinking water in the US. Even so, half of the water has been diverted for power on both sides of the border. Part of the falls grandeur is its height, for they stand as tall as they are deep!

Here are a few ideas to help you enjoy Niagara Falls from either side.

Back when a barrel was a ticket to fame

Niagara Falls was a hucksters’ paradise a hundred years ago when nickel and dime tourism was flush along the American side. Most of the American Falls were obscured by huge power plants and out-buildings. Tourists dressed in corsets and long dresses, suits, and boots, clambered over slippery scaffolds and stairs to glimpse the crashing falls. The Maid of the Mist boats shuttled ticket holders to the base of the Falls. Those looking for fame and fortune tumbled over the rushing waters in ill-fated contraptions or fell in when their boats collapsed before plummeting to their deaths. A few survived the run, but apart from the short-term notoriety didn’t accure the fortune they had envisioned. All this history is documented in thrilling videos and displays inside the U.S. Discovery Center.

Making the most of both sides

Some say there’s nothing to do on the American side but it’s only a matter of travel style. If adrenaline rides, zip lining, miniature golf, go-carts, and wax museums appeal to you, then choose Canada’s options on Clifton Hill. The Skylon Tower stands 775 feet above the gorge and you can see 80 miles on a clear day as the observation deck rotates each hour. Canadians have set up a full destination getaway, with tours, resorts, and hundreds of temptations. For American visitors, the exchange rate makes it all the more alluring — provided you have your passport ready.

If you’re a budget traveler, take advantage of the free attractions and join the throng watching the Niagara Illumination each night when the Falls turn shades of red to blue. The Illumination begins between 5 pm and 8:15 pm depending on the time of year. The lights shine from the Canadian side but US visitors can view the pastel sprays easily from the walkways in the US park. The Niagara Falls Light Show stays on until midnight or 2 AM depending on the month.

The Maid of the Mist has been shuttling Niagara visitors since 1846 when small boats transported people, cargo and even stagecoaches with horses. By 1848 the first suspension bridge was opened and the boats turned toward tourism. Today, the double-deck boats carry up to 600 passengers at a time. Visitors are given a rain poncho and a pair of waterproof sandals. Belongings need to be in a waterproof bag or they too will get wet. Don’t worry, bags are there for the asking. There is a trail as well as an elevator to get from the top of the falls to the river level. After the ride, plan on walking up the ramps and stairways to get as close as is safely possible to the crashing water. It’s such a thrill that you won’t notice how wet you get! You’ll be in good company as celebrities visit and leave just as soggy. Hornblower Cruises runs the Canadian boat tours across the river.

On the American side, you can save time and money with a Discovery Pass which is available from spring to fall. Pick up the passes at the Aquarium or at several points around the park. Purchase tickets for the individual attractions during the rest of the year, but arrive early in the day to see everything. Trolleys run daily and often, making it easy for everyone to manage the distances between sights. Don’t miss the museum and look for the elevators that take you down to the site of the original power plant. The ruins are a sobering reminder that even the best-laid plans can fall apart and quickly. The original Schoellkopf Power Station was considered to the largest in its time. It was built between 1853 and 1898. In June 1956 a slow leak in the back of the power plant led its collapse within hours. You can stand near the remains and marvel at the scale. Today, power plants on both sides of the Niagara gorge run through canals built far from the tourist sites.

At the border, you can cross over the Rainbow Bridge into Canada and back again fairly easily. The route is swift for walkers and views of the falls from that height are wonderful. The car lines can be long depending on the time of day. Be sure to have a valid passport for everyone in your group. There are no visas charges for Canadian or American citizens.

In Canada, the Clifton Hill Fun Pass offers a discount for the rides and attractions. View the falls from130-year-old tunnels carved from bedrock. They make it easy for visitors to view the cascading falls from several platforms and viewpoints.

Both sides are great, of course, but we hope this piece helped you decide whether you want to see the Falls from the north or the south. Happy trails!

PennsylvaniaHow To Spend A Perfect Weekend In Quaint Bellefonte, Pennsylvania 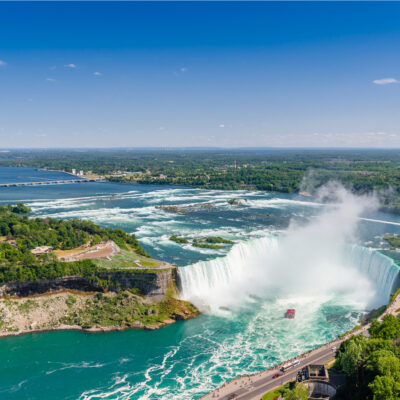 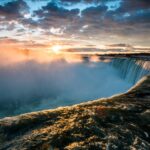 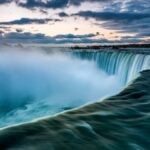