The 10 Best Destinations For Vegetarians (And Vegans)

When choosing a destination to visit, there are many factors to consider. Some travelers ache for outdoor adventure, others seek luxury relaxation, and some just want to see animals in the wild. No matter what your motive is, chances are that you’re going to have to eat. If you have dietary restrictions — be they allergens or otherwise — sometimes you have to learn how to get by on a fresh baguette or steamed rice. If the location is coveted enough, perhaps it’s worth the sacrifice. However, feeling limited in culinary choices can put a huge damper on your vacation.

If you’re one of the 375 million vegetarians or vegans in the world, don’t worry; you can still leave home. Many cultures focus on vegetable-rich dishes, with many “accidental” vegan dishes available. Also, now that people are realizing the damage that mass-producing farm animals causes the earth, there is a massive wave of diners opting to leave meat off of their plates. Almost all dishes can be made with meat substitutes, resulting in some delicious creations in restaurants worldwide.

In this article, we’ll explore the 10 best places for vegetarians (and vegans) to visit. There’s no reason to let your plant-based diet get in the way of your wanderlust. I’ve traveled for over 15 years as a vegetarian and a vegan, and I’ve discovered many more places with delicious food than I could ever imagine.

So forget about bringing along your pea protein and mixed nuts; these places have it all.

Even if you’re a certified meat-and-potatoes guy, you’re probably aware that India is a fantastic choice for vegetarians to visit. Because of the widespread belief in the holiness of cows, finding beef on a restaurant menu is quite rare (no pun intended) — not to mention taboo. An Indian diet is composed of many legumes, such as lentils and chickpeas, in addition to rice and chapatti (bread). If you are vegan, be aware that the term “veg” is widely used, and includes ovo-lacto products such as yogurt and butter.

Some of my favorite dishes are aloo gobi matar and dosa masala.

Situated south of China, this island of nearly 24 million residents offers more to explore per square mile than many of its neighboring countries. Even if you don’t enjoy things like endless mountains, stretches of beaches, and diverse, bustling city centers, you’ll still be impressed by the food. The vegetables are so fresh they taste like they were just picked, and are often served alongside rice or noodles no matter what time of day it is. Whether you head to a restaurant, or are invited to a local’s home, you won’t be leaving hungry. Bean curd, dark leafy greens like bok choy and broccoli, and hot pots are seemingly everywhere.

Ah, Reykjavik. It’s cute, it’s quirky, and it’s the world’s northernmost capital. Because I wanted to get a sense of Icelandic culture — and refused to leave without seeing the northern lights — I spent five weeks in this city. Not once did I get bored of the food or run out of new places to try. While the majority of the country feasts on lambs, horses, puffins, and even fermented shark fin, thankfully, Reykjavik is up to speed with travelers’ needs as well as humane treatment of animals. There are plenty of restaurants to visit, and even their convenience stores (think 7-Eleven) have dedicated sections to organic and vegan snacks.

My favorites: Vegan pylsa (or sausage), bean soups, and anything at Kaffi Vinyl.

Imagine a place where you don’t have to do any research before you head out to eat. From restaurants to pubs to food trucks, there will always be more than one option for you — and it certainly won’t be salad. This place does exist, and it is a paradise for vegans and vegetarians. The farm-to-table movement is in full swing, making whatever is on your plate fresh and organic. Whether you’re in the mood for an old-fashioned burger, a dish of kung pao, or some avocado-laden tacos, you won’t have trouble finding it. The quality and diversity of global fare make it hard to leave Portland.

While I love so many restaurants, some of my go-to places are: The Bye & Bye (try the Crying Tiger sandwich), Blossoming Lotus (check out the bibimbap bowl), and anywhere that serves up tasty brunch.

When I first heard that Tel Aviv was the new vegan capital of the world, I was in disbelief. Residents of this Middle Eastern city are making remarkable strides for animal rights. I was even more in shock when I booked my flight to Tel Aviv on a whim. I just had to see this for myself — not only the restaurants, but also the protests, the animal rights groups, and the animal sanctuaries. While you’ll still see kebabs and shawarma being eaten, many traditional dishes are already vegetarian or vegan. Think shakshuka, hummus, falafel, and stuffed vine leaves. These are readily available in grocery stores, on the street, and in restaurants. If you’re looking for a bit more culinary adventure, there are over 400 veggie restaurants to choose from in Tel Aviv.

Favorite dishes: Hands down, the vegan shakshuka at Café Anastasia and the desserts at Bana.

It doesn’t matter what your diet is like; everyone wants to visit San Francisco. It’s picturesque, forward-thinking, artistic, and a melting pot of more cultures than you could ever imagine. But once you get done exploring the Golden Gate Bridge, China Town, and Haight Street, you’re not going to want to miss out on the many, many places to nourish your appetite. Virtually every type of food you can think of is served in this city, and the chefs prove that these dishes are even better when they’re plant-based. As Eater San Francisco has shown, you’ll never have to go out of your way to find veggie food in the heart of the Bay Area.

What I can’t live without: As a Bay Area native, narrowing down my favorite restaurants is not an easy feat. However, San Francisco wouldn’t be the same without Gracias Madre, Nourish Café, and Shizen Vegan Sushi Bar.

When you think of Spain, perhaps slabs of ham, paella, and sausages come to mind. Nonetheless, once you begin to immerse yourself in Spanish culture, you’ll learn that vegetarian and vegan food is never far from reach. Vegetarians will have plenty to choose from, including tortillas espanolas (a Spanish version of the omelet), pisto (a type of ratatouille common in Madrid), and plenty of cheese. For vegans, there are many “accidental” plant-based dishes to choose from. The most common are gazpacho (a cold tomato soup), patatas bravas (spicy potatoes), and bread topped with tomato and olive oil.

My staple in Spain: When I wasn’t out exploring yummy vegan restaurants, like Punto Vegano in Madrid or Bar Gato Negro in Barcelona, I indulged on the aperitivo of spinach and chickpeas. And, of course, there’s always the fruit-infused sangria.

Located in Eastern Europe, Budapest is one of those cities that come with many expectations. You know you’ll find some of the world’s finest architecture at every corner. There’s no doubt that the Denube River will mesmerize, the baths will soothe you, and the history will sober you. No matter how many bridges you walk across or castles you pass through, there will always be more to see.

The one aspect, however, that will catch you unawares is the availability of plant-based food. Whether you’re interested in traditional Hungarian cuisine (which is normally meat-heavy), or want to savor more modern flare, you won’t leave hungry. In this article, Veggie Visa has covered everything vegan in Budapest, from candy to pickled fruit to ice cream. (Don’t worry; there’s food to be had, too.)

Super yummy: As always, I wanted to try the local cuisine, so I went to Napfényes Étterem for some traditional töltött káposzta, which is stuffed cabbage. My favorite restaurant, however, was Koszmosz Vegan Étterem. I went there at least three times in a week!

Set upon the shore of the Saint Lawrence River, Montreal is the most populous city in Canada’s Quebec province. Home to the globe’s second-largest French-speaking community, its European flair is still prevalent in its architecture, festivals, and cuisine. Due to its opportunities and progressive allure, people have journeyed from around the world to live in Montreal. This diversity and inclusivity are certainly reflected in its gastronomy. Similar to San Francisco, you can find any type of international fare here — whether you’re looking for falafels, tacos, or sushi. However, you should definitely try the local poutine, which is a Quebecois vegetarian dish made with french fries, cheese curd, and gravy.

Where I gravitate: Vegan Rapide was the first restaurant I visited, and their seitan sandwiches kept me coming back. For a more upscale experience in the Latin Quarter, I loved Sushi Momo. (Be sure to make reservations ahead of time.)

Perhaps South America doesn’t seem like it would be a veggie-friendly part of the world, but if you dig a bit deeper, you may be surprised.

Situated in the very northwest of the continent, Colombia is a diverse country with a multitude of landscapes, influences, and climates. As such, there’s a wide variety of food to choose from. While it may seem that pork, beef, and chicken dominate cuisine in Bogota, there are plenty of national dishes for the veggie-minded. Vegans may have a harder time, but for vegetarians, this is the city to visit. The street food here is amazing (and cheap): Walk around La Candelaria gazing at the street art and try empanadas, arepas, pan de yuca, and tamales _(make sure they’re not made with meat)._ If you’re vegan, stick to corn on the cob, patacones (banana chips), or papas a la francesa (french fries), or simply head to one of the city’s many vegan restaurants.

My choices: There are a ton of vegan and vegetarian fast food restaurants all over town. However, if you’re looking for a unique, veggie dining experience, head to De Raiz, Makeout Colombia, Mandragora Veg, or The Pot.

We hope this list helps you plan a trip that will leave you with both good memories and a good taste in your mouth. Happy trails! 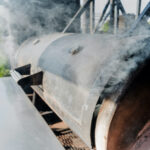