Paintings And Petroglyphs: 6 Cool Things To Do In Santa Fe

There’s a reason why every character in musical theatre seemingly longs to escape to Santa Fe. From its rich Spanish history to its thriving artist colonies, it’s a warm, quirky getaway with a host of hidden wonders.

1. Spend A Day With Georgia O’Keeffe

O’Keeffe is firsthand proof of how easy it is to fall in love with Santa Fe. Georgia visited once, fell in love with the atmosphere, culture, and landscape, and promptly moved to town. It was then that the prolific artist, notorious for her occasionally cheeky style and undeniable love of natural subjects, began to paint landscapes of the desert.

In celebration of her talent and the beauty of her work, the Georgia O’Keeffe Museum was built several years after she died. It houses a treasure trove of her work. In addition to 140 oil paintings, you can see 700 of the artist’s drawings. Not only can you tour the exhibits, but you can also participate in a variety of lectures, workshops, classes, and other programs.

2. Explore The Mysteries Of The Loretto Chapel

At first glance, the Loretto Chapel seems to be just a beautiful church, retired from its holy service but still standing as an example of exceptional gothic architecture. Delve a little deeper, however, and you discover an opportunity to play detective. Granted, it’s unlikely that you’ll figure out the identity of the heretofore unknown builder of the church, but you can have fun trying.

The mysteries continue inside the church, where the “Miraculous” staircase spirals up to the choir loft. No one knows who built the stairs, which is the first mystery. The second lies in the fact that the helix spiral of the staircase lacks any means of central support. Nevertheless, it’s entirely structurally sound. Even if you don’t want to venture to the top, you can still take in the many paintings, stained glass windows, and miniature sculptures.

In keeping with the subject of churches, a trip to San Miguel Mission is a must, as well. Having been built at some point between 1610 and 1628, it’s officially the oldest church in the entire country. The church is a flawlessly preserved piece of Spanish colonial heritage done up in Romanesque style. Thick walls surround it, forming a fortress that must have made the people who found sanctuary there feel safe and secure.

The church is fully functioning, and visitors are always welcome to attend the Latin Mass on Sundays. Inside, paintings brighten the area above the altar, which is also decorated with tapestries, wooden statues, and other carvings. The ringing of the bell, dating back to 1856, still heralds the dawn.

4. Take A Step Back In Time

One of the most entertaining things you can do in Sante Fe is head to El Rancho de las Golondrinas, which is a living history museum that transports you straight back to an 18th-century village. The actors have their roles down pat, including their old-timey garb — which gets more colorful than you might imagine. Along with original buildings from colonial times, a variety of reconstructed structures add to the integrity of the exhibits. Each month, the museum hosts special events, but any time you attend, you have the chance to join in as the locals stage celebrations and traditional festivals from bygone days. Of course, you can always go back even further than the 17th century if you like.

Sante Fe existed long before Columbus got lost, although it wasn’t the Sante Fe we know and love today. Tour the La Cieneguilla Petroglyph Site, which you can reach via an easy hike right off Paseo Real. It’s home to an enormous and encompassing collection of Native glyphs, or rock art.

There are more than 4,400 certified glyphs all within less than a mile of each other. Among other depictions, you’ll find birds aplenty, along with hunters, deer, and flute players. Most the art dates between the 13th and 17th centuries, making them Pueblo, but there are a few modern art rocks, as well as some dating to the Archaic Period, the era between 8,000 BCE and 2,000 BCE!

The building at 109 East Palace in Sante Fe doesn’t look like much. It never has. It’s entirely unassuming — which is no doubt why it was the perfect front for the Manhattan Project. The actual building of the atomic bomb didn’t happen at this site, of course, but all the major players in its creation — Robert Oppenheimer, Richard Feynman, and Enrico Fermi, among others — would visit to meet Dorothy McKibbin, who coordinated their initial trip to Los Alamos, where they lived during the Manhattan Project.

From its open-air markets selling produce, crafts, and art, to its many museums and preserved sites commemorating moments of pre-history, Sante Fe is unlike any city you will ever visit. The vibe is low key, the locals are welcoming, and you’ll find many transplanted residents who, like Georgia O’Keeffe, couldn’t resist moving after just one visit. 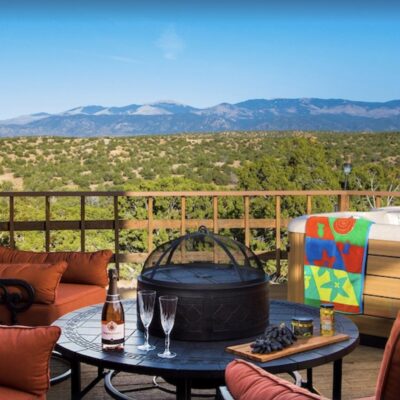 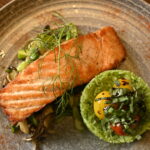 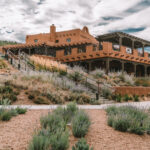 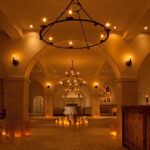