15 Things Everyone Should Do In Costa Rica

Costa Rica is a small country with two ocean coastlines. The contrast between its fertile rainforests and luxury resorts allows you to find the perfect balance and plan an unforgettable vacation. Whether you want a beachy tropical retreat or a hiking adventure with a side of water sports, Costa Rica will gladly accommodate you.

Plan a stay at the popular five-star resort at the Four Seasons Papagayo, located on Panama Beach. The surrounding area offers shopping, dining, and nightlife, plus proximity to the exotic natural beauty of Costa Rica’s rainforests.

Panama Beach isn’t the only choice on the Pacific coast. Up-and-coming resort towns include Hermosa Beach and Coco Beach, just minutes from one another.

2. The Spirit Of Costa Rica

Make sure you begin your stay with a taste of the country’s finest-crafted spirits. Like other countries in Central America and the Caribbean, rum is Costa Rica’s drink of choice. The country is home to one of the most-respected rum brands, Ron Centenario, which is produced using only indigenous sugarcane from fields and plantations. Try it out at Anejo at the Four Seasons Papagayo, or settle in at one of the friendly local watering holes – called ticos – and try a taste of guaro, a clear, distilled sugarcane liquor.

3. Get A Golden Ticket

If drinking rum is not your thing, or if you have an insatiable sweet tooth, you’ll be happy to know that Costa Rica is home to a burgeoning chocolate industry. Fair-trade gourmet treats are made and sold all over the country, but for a special experience, you have to check out the Don Olivo chocolate tour in La Fortuna de San Carlos in the north-central region. Learning about chocolate, from bean to bar, has never been so fun and delicious.

During the tour, visitors are treated to an authentic depiction of how this delectable treat is grown, fermented, and processed for consumption. Of course, there are samples for you to enjoy against the backdrop of the surrounding volcanoes and forest.

4. The Freshest Coffee On Earth

While you’re enjoying your sweet treats, you should know that chocolate and coffee share the same growth zones. Wherever great chocolate is found, even better coffee is close at hand. Check out one of the many Costa Rican coffee plantations for tastings, tours, or just for a bag of beans to take back home and brew for your family. There are several coffee-centric destinations in Costa Rica, and some, such as Heredia, are close to major cities. Check out Coffee and Adventure or The Classic Britt Coffee Tour, both located just seven miles from the capital, San Jose.

While you are enjoying the fruits of the jungle, you may yearn to slow down and appreciate the beauty all around you. A great vantage point can be found on horseback, and there are several tours on offer. In Monteverde, you can book horseback riding tours ranging from two-and-a-half to six hours. This area is quaint and quiet, tucked away from the more touristy attractions. Visit the countryside; commune with brightly-colored flowers, the rarest of birds, and the famous blue morpho butterflies. And if you want to get closer to some of these smaller creatures, check out the Monteverde Butterfly Gardens before moving on to your next destination.

After a jaunt into the Costa Rican central forests for chocolate, coffee, and horseback riding, you can reward yourself with a soak in the country’s natural volcanic hot springs. A little further north than Monteverde, the Arenal National Park is home to Costa Rica’s largest lake, Laguna de Arenal, and the Arenal Volcano. The volcano’s geothermal activity sends thermally heard water bubbling up into several pools. Visit one of several volcanic spa facilities nearby; they run the gamut from super-luxe high-end to small and unpretentious.

When you return to the balmy blue ocean waters, book a beach massage and zone out to the sounds of lapping waves in the deepening twilight. During peak season, the weather is very mild, with average temperatures in the 80s and a refreshing wind off the ocean. Your massage experience will play out under a palm tree canopy, shaded from the heat of the afternoon. After you are relaxed and refreshed, before the sun dips below the horizon, take to the water to witness an amazing spectacle…

While you’re on the pristine Pacific beaches of Costa Rica, book a Pacific sunset cruise. Several companies operate tours out of the major resort towns, and you can have your choice of vessel — from catamarans to sailboats to larger ships. Complement the ocean breeze with a rum cocktail and watch the light refract through the atmospheric haze, dancing in a pageant of blood and orange against endless ocean.

9. Feed Your Wild Side

Take advantage of the dining options at or near the resorts, such as Abbocato in Panama Beach, or Cafe Mar Azul in Guanacaste. Both feature local produce and seafood prepared simply by the shore. Although Costa Rica is primarily known for its nature and adventure, a trip to the capital city of San Jose will reveal culinary delights more commonly associated with Europe. Noted French chef Francis Canal is at the helm of the impressive Grana de Oro restaurant, located in the Hotel Grano de Oro. A world away from beach food, Grana offers such delicacies as rabbit ravioli and house-aged beef tenderloin, alongside Costa Rican seafood and unique dishes such as roasted Costa Rican pork with yucca croquettes and tamarind sauce.

Top off your continental dinner with copo – Costa Rica’s national dessert. It’s similar to Hawaiian shaved ice, but adds powdered milk, kola syrup, and condensed milk for a richer texture. Copo stands are ubiquitous, especially near the beaches. Some jazz up their offerings with fruit, candies, and other flavored syrups, even Dr. Pepper. At some ice cream shops, you can order a mashup of a copo and an ice cream sundae.

Now that you’ve treated yourself to Costa Rica’s best cuisine, rediscover the rainforest and experience nature from a new perspective. Just a short trip from San Jose, Aerial Tram tours carry you on a cable through the rainforest canopy, providing stunning views of the world below. Afterward, the tour guides will let you down and take you on an interactive nature hike. You’ll see brilliant butterflies, explosive orchids, and fascinating reptiles along the way.

Take a walk among the surreal topiaries in Parque Francisco Alvarado in the city of Zarcero. Created by a visionary artist in the 1960s, this fantastical garden has long been a must-see for visitors to Costa Rica. The garden sculptures here are huge and impressive. Some resemble human-like creatures, while others take the shapes of animals and dinosaurs; still others are woven into large tunneled archways that invite you to wander in wonder. The park is still meticulously manicured by the original artist, Evangelista Blanco.

Some of the wonders of Costa Rica are not easily explained, such as the Stone Spheres or “Las Bolas” located on the Disquis Delta and Isla del Cano. More than 300 of these spheres dot southern Costa Rica. They are believed to be products of the Disquis culture dating from 500-1500 AD. While archaeological tourism is not widely developed in Costa Rica, these objects have created a growing interest in the ancient civilizations that flourished in this part of Central America pre-Columbus. Visitors can see the spheres at the national monument at Guyabo, or at a smaller site called Farm 6.

Another must-see in Costa Rica is the Hotel and Restaurant El Avian in Manuel Antonio. The entire structure is built around a C-123 cargo airplane. It evokes the Tarzanesque feeling of living in a crash-landed airplane in the jungle. But instead of being filled with snakes and jaguars, the good folks at El Avian serve cocktails and craft beers alongside a fun pub menu.

Before you pack up for your flight home, grab one more bite in San Jose.

Yet another fantastic meal is waiting at San Jose’s Park Cafe, which is more than just a fine dining establishment. Park Cafe doubles as an antique store. The cafe is renowned for its nouvelle Costa Rican cuisine, and its many artifacts and rare furniture pieces. Enjoy a dish of beef carpaccio with mustard and truffle oil while you shop for a piece of old Costa Rica to bring home with you. The cafe has a wonderful garden dining room filled with furnishings that are, of course, for sale. 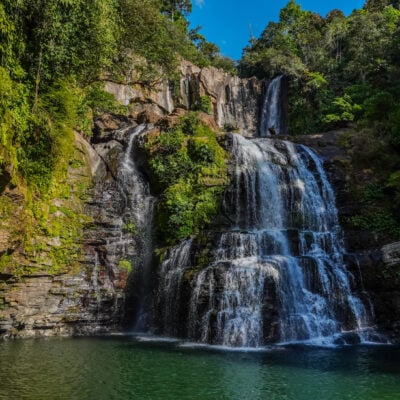 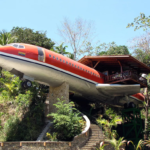 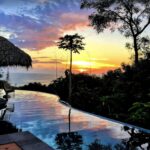