Iceland has become a more popular travel destination of late, but people are still just beginning to discover the unique cultural aspects of this former Viking colony.

Personal names are preferred in Iceland, with most people opting, almost universally, to refer to others by their first name alone, no matter how formal the occasion. Phone books pay tribute to the norm by listing subscribers by alphabetically by first name.

Names are so important in Icelandic culture that any first name not previously used in the country must first be approved by the Icelandic Naming Committee. If a name is rejected by the committee, parents must start looking for another name for their child.

2. One Of Only Two Places In The World To See This

Þingvellir was dubbed a UNESCO World Heritage Site because it is home to one of the most unique things you can see in the whole wide world. In fact, you can only see this particular wonder in one other place in Africa.

In Þingvellir, the North American and Eurasian tectonic plates jut out of the ground and move 2 cm further apart every year. This makes for a very rare geological arrangement, and you can take some truly spectacular photos with which to wow your friends back home.

Even cooler, you can snorkel or swim between the tectonic plates when you go for a dip in the Þingvallatn lake. (Much more fun in the summer, as you might imagine!)

3. Where Are All The Forests?

Upon first setting foot in Iceland, you will notice a stark absence of forests. It’s not a mistake. Since the country was formed due to severe natural phenomena like glaciers and volcanoic eruptions, the land has been severely afflicted with deep valleys and rocky layers inhospitable to trees.

Although some believe trees won’t grow in Iceland, they do. They’re just rare. What made trees even more scarce is the fact that Vikings heavily deforested the island after they first arrived. After all, you can’t build longships out of stone!

Instead of walking through forests, visitors met with more eternal monuments to the power of nature, like Eyjafjallajökull, Iceland’s most famous volcano. (It was Eyjafjallajökull whose eruptions downed most of Europe’s planes and stranded hundreds of thousands of travelers back in April, 2010.) Another stand-out isThrihnukagigur, a volcano that you can actually enter!

The Icelandic folk will happily share stories with visitors about one of their popular cultural superstitions — the existence of supernatural beings like elves and trolls upon their island.

They put so much stock in these beliefs that they’ll actually alter construction schedules and other development plans if they think they’ll overlap with the elves’ natural habitats.

Guides will tell visitors that the sulphuric smell that permeates Iceland is actually the smell of the dirty bath water of trolls.

5. No McDonalds, But This Great Food Instead

Although it seems like no place in the world that can avoid the far-reaching hand of fast-food conglomerate McDonalds, Iceland seems to have somehow stayed under the radar.

You won’t find a single McDonalds in the country, but you will find delicious Icelandic hot dogs made from a blend of lamb, pork, and beef with some fantastic toppings. Visitors will also want to try the local fish and chips, meat soup, and Skyry yogurt.

6. One Of The Safest Places In The World

Perhaps most important to many travelers is safety, and fortunately, there’s barely any crime in Iceland — least of all the violent sort.

A shocking fact to anyone from the U.S. is the fact that the country has no standing army, and its police officers don’t carry guns. There has actually only ever been one man shot by the police.

It’s common for locals to stop for walking passersby and offer rides, so expect a friendly experience when you’re in Iceland!

7. Beer Was Illegal (Key Word WAS)

Iceland had a prohibition on alcohol from 1915 until 1935. Most alcoholic beverages were legalized afterward, but beer remained illegal until March 1, 1989.

You can’t go to Iceland without taking a soak in one of the hot pools. These volcanically heated pools have been popular with bathers since Viking times, and they remain a huge attraction for visitors and locals alike.

Two of the best pools in Iceland are the Blue Lagoon in Reykjanes and the Nauthólsvík geothermal beach in Reykjavík.

Remarkably, almost all of Iceland’s heating and electricity needs are supplied by the geothermal water reserves and hydroelectric power!

9. Spot Some Of Nature’s Biggest Animals

Whale watching in Iceland is a bigger industry than whaling itself, and for good reason.

April through to October is the best time to go whale watching in Iceland. If you’re lucky, you might see up to 20 species of Cetacea including the Orca, Minke, Humpback, and Blue Whale.

The reason it’s such a perfect place to see an abundance of marine life is that the cold waters off the coast provide the perfect environment for a diverse marine ecosystem.

If you want to learn more about Iceland, check out our article: Headed To Iceland? Here Are 12 Things To Include In Your Itinerary. 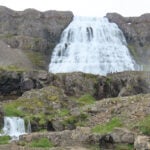 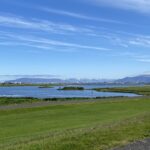