If you enjoy architecture, nature, beer festivals, and delicious food — Germany awaits! But here are some things you might not know about this popular destination that might whet your appetite!

1. Berlin Is The Bigger And Better Venice

Most people associate Venice with its large network of canals and abundance of bridges, but Berlin, the capital of Germany, actually beats Venice out in this category.

The history of Berlin goes back to the 13th-century. Today, it’s home to a whopping 960 bridges, nearly 60 square kilometers of water, and 180 kilometers of waterways that are navigatable by boat. Combined with the neighboring state of Brandenburg, Berlin actually holds the record for Europe’s largest inland water network.

One of the best ways to see Berlin is the Spree Cruise, a nighttime affair that takes visitors through the city’s waterways in style, sharing riveting details about the city’s past and present.

The city of Berlin itself is nine times bigger than Paris, and — interestingly enough — many French people actually choose to immigrate to Germany. In 2013, over 20,000 citizens of France made the move. Perhaps part of the reason is that international students get a free education and a post-study work visa in Germany.

2. The Most Popular Snack In Germany

You can get currywurst elsewhere in the world, but it’s never quite as good as it is in Germany. The dish, made of sliced and grilled pork sausage with a sauce consisting of ketchup and curry powder, is one of the most popular meals in the country, with over 800 million currywurst plates eaten every year!

This spicy street food has become a cult classic; there’s even a Berlin museum completely dedicated to it. Not many foods can boast a permanent series of exhibits dedicated to chronicling its history.

Konnopke’s is known as one of the best at making currywurst, and it’s hard to plan a trip to Berlin without including a stop at this boutique eatery.

Beyond currywurst, some other popular German dishes include schnitzel, bratwurst, apple strudel, and pretzels. Rinse it all down with a beer, and you’ll truly be experiencing Germany like a local!

3. Fancy Yourself An Animal Person?

Germany has the most zoos in the world, with 400 registered zoos and 700 other facilities including gardens, wildlife parks, animal reserves, aquariums, safari and bird parks.

Besides holding the title for most zoos, it also has the title for one of the best and largest zoos in the world: Berlin’s Zoologischer Garten. It’s Germany’s oldest zoo, spanning an immense 33-hectares while catering to 20,000 animals and 1,400 different species. Some of the inhabitants include Germany’s rare “giant pandas,” gorillas, giraffes, and elephants. Almost 20,000 animals live there.

The Zoologischer Garten is an animal experience that you’ll never forget; no other zoo in the world even comes close!

4. The Bridge Made By The Devil

One of the most fascinating structures in Germany is the Rakotzbrücke, or “devil’s bridge” as the locals call it. The reason it earned this nickname is that it was such a miraculous feat of engineering at the time of its construction (the mid-1800’s) that people assumed such a machination must have been built by none other than the Devil himself.

While the bridge was definitely built by mere mortals, its designers did create a truly bizzare landmark. When mirrored against the river beneath, the bridge’s delicate arch creates a perfect 360-degree circle that catches the eye.

Rakotzbrücke is nestled in Kromlauer Park in Gablenz-Kromlau. A walk through this 200-acre park will reveal natural beauty to complement this oddity of engineering.

5. If You Love Beer, You’ve Come To The Right Place

Beer is a huge part of the culture, and the numbers show it; Germany ranks second among all European countries for beer consumption. Germans even exceed Americans’ fondness for suds, consuming 28 gallons per capita every year!

That means Germans drank over 2.55 billion gallons of beer in 2012, second only to the Czechs. And beer drinking has actually been on the decline in recent years, relatively speaking!

With a prevalent beer culture comes a strong brewery presence; Germany boasts over 5,000 brands of beer made in 1,200 different homegrown breweries.

One of the reasons the beer is so good here is the strict beer laws governing the brewing process. The Deutsches Reinheitsgebot regulation introduced in 1516 dictates that only barley, hops, and water may be used.

The Hirschgarten in Munich is a lovely beer garden that must be visited in person to be appreciated. Here’s a local tip: if you want to get one beer in Germany, show your thumb. If two is more your speed, show your first finger (the pointer). That means you want two beers, one with the thumb and one with the finger.

Navigating Germany is a breeze when you know where to start. Now that you have a few tips for what to see, what to eat, and what to drink when you’re there — auf wiedersehen!

Want to read more? Check out 15 Things To Do And See In Germany. 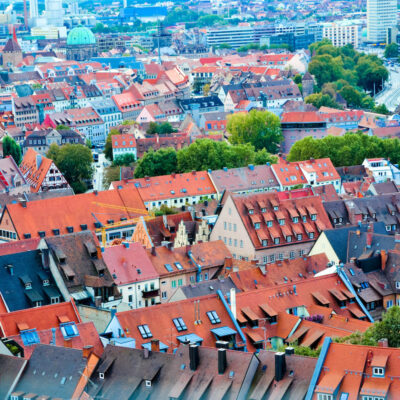 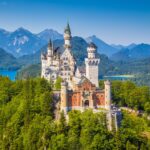