10 More Totally Free Things To Do In Boston

Experiencing Boston isn’t inexpensive. Travel, the cost of your hotel, Red Sox games, bowls of clam chowdah – they all add up! But there are many great excursions you can take that won’t lighten your purse at all. In fact, they may just turn out to be the most memorable part of your trip!

Here are 10 more (awesome) free things you can do in Boston!

Located in the Charlestown Navy Yard, “Old Ironsides” is the oldest commissioned warship still afloat in the United States Navy – in the whole world, as it happens- having been launched in 1797. Naval officers and crew still serve on her decks, leading tours throughout the day. You can speak with them and ask any questions you may have about the history of the ship. Tours are free, but you do need a federal or state I.D., or a passport to get on board.

This trail explores the rich history of Boston’s free black community. Sites along the trail include: the country’s first public school for black children, a home that was part of the Underground Railroad, and The African Meeting House, where Frederick Douglass delivered a landmark anti-slavery speech and William Lloyd Garrison started the New England Anti-Slavery Society.

You can walk the Black Heritage Trail any time of year, but the National Park Service offers a free 90-minute guided tour in the spring, summer, and fall.

If you are visiting Boston mid-week, you can save some money at the Museum of Fine Arts, which houses pieces by Rembrandt, Renoir, Monet, and Manet, just to name a few, and has a four-floor wing dedicated to The Art of the Americas.

The museum is free every Wednesday after 4 p.m., and it stays open until 10. In the evening, you can take the Highlights of the Museum Collections guided tour, which lasts about an hour. There are also 15-mimute so-called Spotlight Talks which offer history and analysis of specific pieces. The times and pieces vary, so check the schedule before you go. But the tour and talks are also free.

There is a suggested donation on Wednesday night; it’s the same as a regular adult admission, which doesn’t make a lot of sense, but you can give as much or as little as you’d like. The museum is also free several times a year on what it calls ‘open house days,’ which include certain holidays.

The three University properties below are free to the public.

The Harvard Semitic Museum is home to thousands of Near Eastern archaeological artifacts. Many come from museum-sponsored excavations in the Middle East, including Israel, Egypt, and Iraq.

The Arnold Arboretum fills 281 acres, and you’ll forget you’re in the city. Free guided tours are offered at various times during the week depending on the season. The arboretum is not located near campus. It’s by the Forest Hills and Jamaica Plain neighborhoods, southwest of Boston.

The Collection of Historical Scientific Instruments preserves more than 20,000 objects Harvard has used for teaching and research over more than 340 years.

This museum details the history of Massachusetts, which as you know, is important in American history and not just state history. It’s home to several significant documents, including one of the 14 original copies of The Bill of Rights and an original copy of The Declaration of Independence. The museum uses technology from the Massachusetts Institute of Technology (MIT) to help protect these treasures.

The museum is free and there’s free parking – which is unheard of in Boston! It’s open weekdays year-round and weekends May-October. The museum is closed on all major holidays. It’s located about five miles south of downtown Boston, near the John F. Kennedy Presidential Library.

6. The Institute of Contemporary Art

While modern art isn’t for everyone, the museum presents art in all media, and displays numerous works by female artists from the 20th and 21st centuries. It also features performing artists including dance, music, and theater.

A free guided tour on Thursday evenings includes a Highlights and Architecture Tour. The museum is located on the water just south of downtown near the World Trade Center.

The Irish are the largest single ethnic group in Boston. Many settled in the city while trying to escape Ireland’s great famine. There are twenty stops along the trail which detail the role of the Irish in Boston’s history.

The entire trail is 3 miles long. You can find a map at the Visitor Information Center on Boston Common or at the Prudential Center. The Boston Irish Heritage Association does offer guided tours, which cost $15 per person.

This park connects the towns of Lexington and Concord, which hosted the first battles of the American Revolution. In addition to the visitor’s center, there are several free guided tours. You can take part in a militia muster, or learn more about April 19, 1775 during a program at the North Bridge. While free, there is a small fee if you reserve your spot for any of the guided tours online. The tours are only offered certain times of year, and the schedule varies for each tour.

Patriots’ Day, a Massachusetts state holiday observed the third Monday in April, is a busy time at the park. During the three-day weekend, there are reenactments, interactive demonstrations, and parades. Since Patriots’ Day doesn’t always fall on April 19th, there are special events on the actual anniversary as well.

While the grounds are open year-round from sunrise to sunset, the visitor centers are closed during the winter and the sites in the park are open seasonally as well.

While it may not feel like a traditional craft brewery today, Jim Koch, the founder of Sam Adams, helped start the craft beer revolution in the mid-1980s. Today, you can tour the Boston brewery every day except Sunday. You’ll also be able to sample the beer, including some drafts that may not be in stores just yet.

Free tickets are given out on a first-come-first-serve basis, so get there early and try to avoid Saturdays. The tour lasts about an hour. While it’s free, there is a suggested donation that benefits local charities, as well as the company’s charity for small business owners around the country.

The brewery is located about five miles southwest of downtown Boston, so parking can be difficult.

This is only a free activity if you’re okay with just window shopping and people watching. The street is located in the Back Bay and is known as the “Rodeo Drive of the East.” It’s lined with boutiques, art galleries, salons, and restaurants. There are also pop-up shops, so if you’re looking for something unique, Newbury Street is the place to find it.

The area was originally part of Boston Harbor, but was filled-in, hence the name Back Bay. It was the hottest residential spot in the late-1800s, so if you’re not into shopping, the architecture still makes it worth a stroll down the street.

Want more ideas? Check out 12 Completely Free Things To Do In Boston. 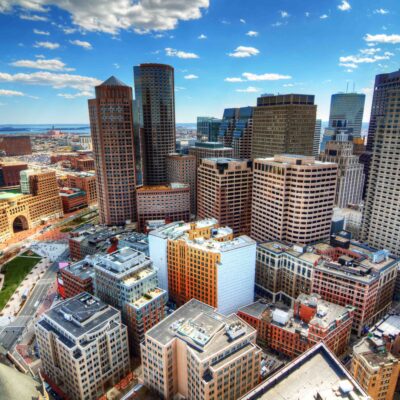